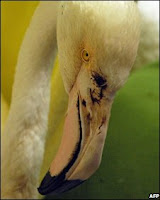 Four teenagers in Australia have been charged with an attack on an almost blind greater flamingo, thought to be one of the oldest of its kind alive.

Police and zoo officials said the flamingo's head and beak were injured and it was bleeding from an eye. The bird, aged at least 75 years, is in a critical condition, zoo staff said. The bird has been at the zoo for most of its life and, with its Chilean partner, has been one of Adelaide zoo's most popular exhibits.

Police said four men aged between 17 and 19 were charged with aggravated ill-treatment of an animal and released on bail to appear in court at a later date.

The exact age of the flamingo remains unknown, as proper records from his arrival in the 1930s do not exist. "The bird arrived at the zoo in 1933 and was a mature bird at that stage..."

Blogged because of the impressive age of the bird. One is not surprised by an aged tortoise or large mammals like elephants and whales. But I had never expected to encounter a bird older than I am.

Cruelty to animals is a known predictor of serial killers. These young men need professional counseling. If I'm judging the mood of the public down under correctly, this might also be a good time to revive the pillory.