The delight of voting early 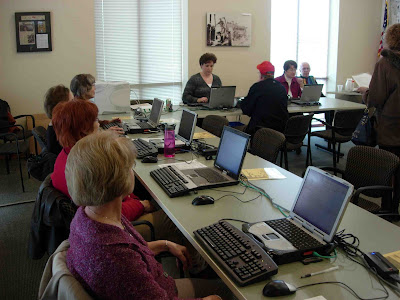 A variety of news media have warned of the possibility of near-havoc at the polls next week, not because of malfeasance or incompetence, but simply because of an overwhelming turnout of voters, especially first-time voters who will require more attention and assistance.

For that reason many cities (and the Obama campaign) have been actively promoting early voting as a way to make next Tuesday more bearable. Already there are reports of lines two hours long - and this ten days before election day.

I don't live in a large city (it's a smallish town suburb of a metro area), and it's filled with what Sarah Palin would call "real Americans" who relish their voting right to the extent that even during the primaries there were lines winding through the building and outside the door. Anticipating a huge turnout next week, my wife and I stopped by the town hall this morning to process absentee ballots.

We were greeted by the scene above. Four clerks ready to check IDs and eligibility and to sign people in, two more to print the form, plus a gentleman to explain the ballot-processing procedure. No one in line, zero minutes waiting. Voting was an absolute pleasure.

I'll drive by next week; I expect to see a line stretching from the firehouse to the cornfield.

Addendum: When I posted suggestions last week about How to vote early, one of the (numerous) McCain supporters who visit this blog appended a cautionary suggestion in the comments section regarding the risk of "buyers remorse," since voting early precludes adjusting one's decision based on October surprises or singing by the proverbial fat lady. This is true, and I do encourage other Republicans to heed that advice. Wait - don't vote now. And if any candidates give half-hour presentations during primetime TV this week, have a listen; you might change your mind.