Nothing To Do With Arbroath - a Recommended Blog 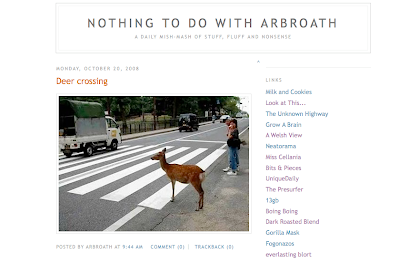 This month's installment in the Highly Recommended Blog series is Nothing To Do With Arbroath, one of the stalwarts of the web (since January 2005, which is forever in blog-years), accumulating a Technorati authority rating of 367, placing it in the top 10,000 blogs.

I didn't discover Arbroath until March of this year, and since then have had occasion to link to it about twice a week. The unusual title apparently relates to the blogger's home territory of Arbroath, Scotland. The subtitle "A Daily Mish-mash of Stuff, Fluff, and Nonsense" reasonably reflects the content; the material I link to in Arbroath is typically what I would term "ephemera" - items that pass by and which we may not see again but which are worth noting before they disappear.

Much of the content in Arbroath is harvested from online newspapes and periodicals, especially those of the British Isles. One category of special interest to the blogger is the inanity and insanity of bureaucracy, with stories ranging from the humorous to the horrorshow.

Since I'm in the process of cleaning up my stored links, I'll use this occasion to offer some of the Arbroath links which I bookmarked but haven't had time to use. Browse the list below, and if the material interests you, consider adding Arbroath to your list of regularly visited blogs.

Firefighters were called to rescue a branch which was trapped in a tree.

On a GCSE English exam, one pupil who wrote “f*** off” was given marks for accurate spelling and conveying a meaning successfully.

A man was arrested on suspicion of assault after he sprayed his next-door neighbour with a garden hose during a minor argument.

An 83-year-old woman's birthday party drew some uninvited firefighting guests after the candles on her cake set off a smoke alarm.

A 78-yo man walking innocently along a road has his walking stick confiscated by police because it could be used as an offensive weapon.

Councillors approve reimbursement to themselves for walking to work.