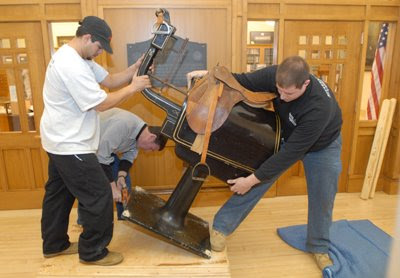 Originally a gag gift of sorts, Coolidge kept this bizarre little apparatus in a dressing room next to his bedroom. He only tried it out once someone basically dared him to, and he found that he actually loved it and couldn't get enough. To the amusement of Mrs. Coolidge and various White House visitors, he rode the mechanical horse frequently throughout his presidency, always while wearing his hat, but not always while wearing clothes.

The image above shows workers packing the mechanical horse for use in a travelling exhibit at western museums.

Although he was raised on a farm in Vermont, Coolidge developed an allergy to actual horses, Bartlett said. The mechanical horse allowed the chief executive to get some exercise in a quick and efficient way. Controls on the machine let the rider vary the intensity from a trot to a gallop. Bartlett said the horse has not worked in years, however.