"‘I really don’t understand this squeamishness about poison gas."

A reminder from The Telegraph that attitudes about chemical weapons vary with time and circumstances:

Winston Churchill authorised the use of the “most devastating chemical weapon ever devised” against the Russian Bolsheviks at the end of the First World War, a noted historical author has revealed. 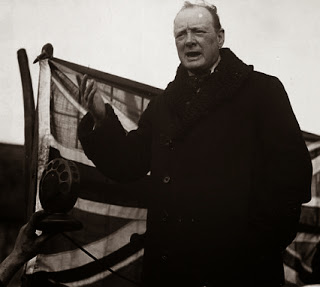 Giles Milton, who was speaking to The Telegraph following his appearance at the Wigtown Book Festival to promote his new book, Russian Roulette, said: “Churchill, who was secretary of state for war at the time, wanted to really go hard against the Bolsheviks in Russia...

“The British had developed this highly secret chemical weapon called the M Device, which is like a shell with a canister of gas on the end... Churchill’s idea was to use the M Device against the Russian Bolsheviks. 50,000 of them were taken up in planes and then dropped on the Bolshevik Red Army positions and Bolshevik controlled villages in Northern Russia between August and September 1918.”..

“There’s a line in the memo [re its possible use in North India] that says, ‘I really don’t understand this squeamishness about poison gas.’ Today that reads pretty badly.”

Photo cropped from the original at Getty Images.