Airplane seats are shrinking. Are you? 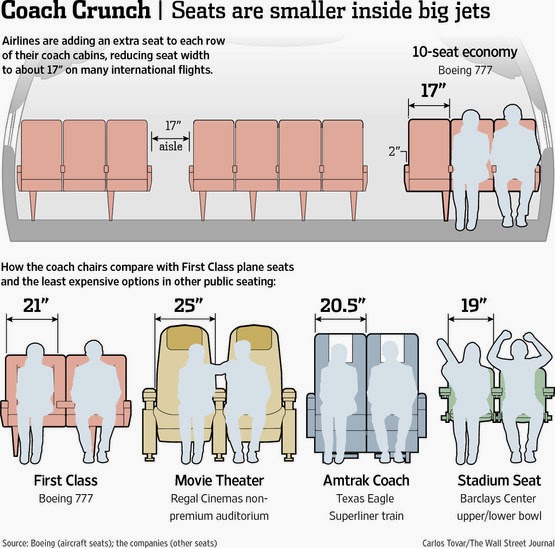 From a story in the Wall Street Journal:


Airlines' push to lure high-paying fliers with flatbed business seats and premium economy loungers is leaving economy-class passengers with less space. A push over the past decade by carriers to expand higher-fare sections has shrunk the area devoted to coach on many big jetliners. But airlines don't want to drop passengers. So first airlines slimmed seats to add more rows.

Now, big carriers... are cutting shoulder space by wedging an extra seat into each coach row. That shift is bringing the short-haul standard to long-haul flying.

The new trend in economy seating reverses a half century of seat growth in economy class. Early jet planes like Boeing's 707 had 17-inch seats, a dimension based on the width of a U.S. Air Force pilot's hips...

The solution, said Mr. Clark at Emirates, is to offer distractions like big meals, frequent snacks and lots of electronic entertainment...

"With food and TV," said Mr. Clark at Emirates, "people are mesmerized."

"Panem et circenses" is what they used to call it.  (Many more details at the link).