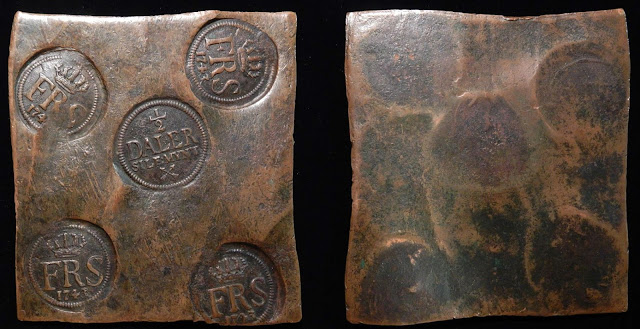 Yesterday I had the opportunity to see and handle an example of 18th-century Swedish "plate money" ("platmynt").


Platmynt or plate money was minted in Sweden between 1644 and 1809 where it both helped and confused the Swedish economy. Sweden's currency system was based on silver, but Sweden produced no silver and traded its copper to get silver for coins. In the early 17th century Swedish copper mines produced two-thirds of Europe's copper. Most of that copper was exported to Spain for small denomination coinage...


Meanwhile Sweden's Falu copper mine had been producing large ingots of unrefined copper, some being several inches thick and weighing as much as 43 pounds. With the placement of a circular seal on each corner showing the date, the Swedish crown and the initials of Queen Christiana, the plates became coins.

Each plate was stamped with a denomination. The largest, the 10-Daler plates, were struck in 1644 and 1645 and only 10 of those 26,774 plates exist. Weighing 43 pounds, they were too large for circulating coins and in 1646 the Swedish Government decreed that the largest denomination would be the 8-Daler plate, a 35-pound coin.

More details at the New York Times and at Past and Present.