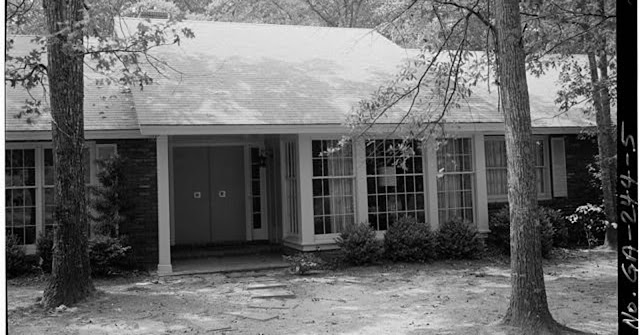 The 39th president of the United States lives modestly, a sharp contrast to his successors, who have left the White House to embrace power of another kind: wealth.  Even those who didn’t start out rich, including Bill Clinton and Barack Obama, have made tens of millions of dollars on the private-sector opportunities that flow so easily to ex-presidents...

The Democratic former president decided not to join corporate boards or give speeches for big money because, he says, he didn’t want to “capitalize financially on being in the White House.”

Presidential historian Michael Beschloss said that Gerald Ford, Carter’s predecessor and close friend, was the first to fully take advantage of those high-paid post-presidential opportunities, but that “Carter did the opposite.”

Since Ford, other former presidents, and sometimes their spouses, routinely earn hundreds of thousands of dollars per speech.

“I don’t see anything wrong with it; I don’t blame other people for doing it,” Carter says over dinner. “It just never had been my ambition to be rich.”..

Carter decided that his income would come from writing, and he has written 33 books, about his life and career, his faith, Middle East peace, women’s rights, aging, fishing, woodworking, even a children’s book written with his daughter, Amy Carter, called “The Little Baby Snoogle-Fleejer.”

With book income and the $210,700 annual pension all former presidents receive, the Carters live comfortably. But his books have never fetched the massive sums commanded by more recent presidents...

Ex-presidents often fly on private jets, sometimes lent by wealthy friends, but the Carters fly commercial. Stuckey says that on a recent flight from Atlanta to Los Angeles, Carter walked up and down the aisle greeting other passengers and taking selfies...

That no-frills sensibility, endearing since he left Washington, didn’t work as well in the White House. Many people thought Carter scrubbed some of the luster off the presidency by carrying his own suitcases onto Air Force One and refusing to have “Hail to the Chief” played...

When Carter looks back at his presidency, he says he is most proud of “keeping the peace and supporting human rights,” the Camp David accords that brokered peace between Israel and Egypt, and his work to normalize relations with China. In 2002, he was awarded the Nobel Peace Prize for his efforts.

“I always told the truth,” he says.

Carter has been notably quiet about President Trump. But on this night, two years into Trump’s term, he’s not holding back.

“I think he’s a disaster,” Carter says. “In human rights and taking care of people and treating people equal.”..

They watch Atlanta Braves games or “Law and Order.” Carter just finished reading “The Innovators” by Walter Isaacson. They have no chef and they cook for themselves, often together. They make their own yogurt.

On this summer morning, Rosalynn mixes pancake batter and sprinkles in blueberries grown on their land. Carter cooks them on the griddle.

Then he does the dishes.

I highly recommend reading the full story at the Washington Post.  His life and his personal principles offer such a stark contrast to current and recent presidents.  Here's one final excerpt about his home:


...a two-bedroom rancher assessed at $167,000, less than the value of the armored Secret Service vehicles parked outside.

Photo credit Library of Congress, via CNBC.
Reposted from 2018 to add this photo of Jimmy Carter at his 96th birthday party several months ago: 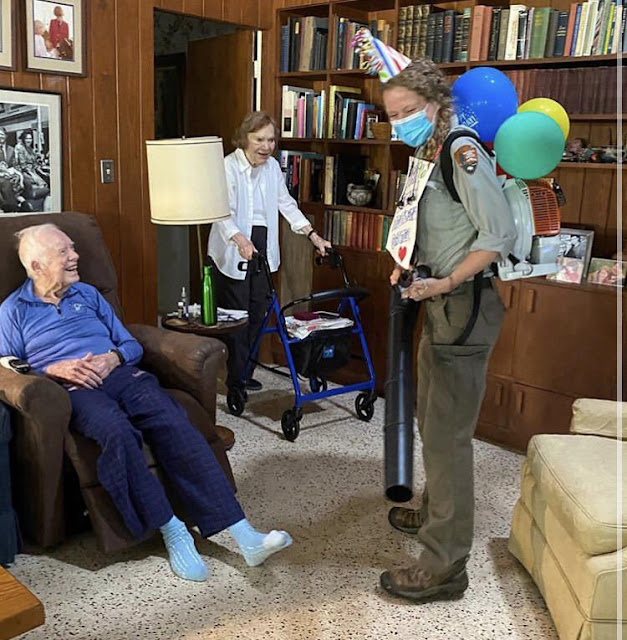 He was too frail to attend the inauguration today, but was fondly remembered by several commentators (and me).
Via the Pics subreddit, where there is an affectionate comment thread.
See also: Jimmy Carter: "End the global war on drugs" (2011)