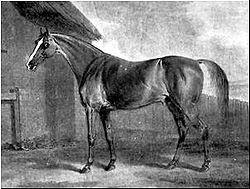 Potoooooooo or Pot-8-Os... was a famous 18th-century Thoroughbred racehorse, known for his defeat of some of the greatest racehorses of the time and his later life as an influential sire...

Pot-8-Os acquired the strange spelling of his nickname through a transliteration error, when a stable lad was asked to write the original name, "Potatoes", on a feed bin. The lad's version, Potoooooooo, was said to amuse his lordship so he kept it, and it appears in the General Stud Book.

There must be other names that could be reconfigured in a similar manner.  CCCPO (or would it be CPPPO?) comes to mind.  Readers can undoubtedly come up with others.


Today I learned:  "The term [Thoroughbred] is a proper noun referring to this specific breed, though often not capitalized, especially in non-specialist publications, and outside the US."