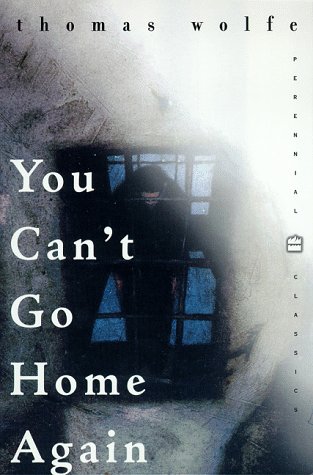 During my "feet in the air" post-bunionectomy blogcation, I pulled Thomas Wolfe's famous novel You Can't Go Home Again off the shelf for a reread.  When I was a young man in the 1960s, his writing fascinated me, and I think I must have read four or five of his novels.  Now that I'm older it's more difficult to find the energy to tackle a 700-page novel, and I'm frankly less interested in a thinly-disguised autobiography of a struggling young writer.

But at his best, Wolfe was capable of incisive commentary on the manners and mores of his contemporaries; I've pulled several excerpts relevant to the lifestyles of 1920s-1930s Americans and posted them in the last few days posted the old links below.  He also can be masterful in his use of language, achieving a lyrical style that is almost poetic.  Here, for example is a passage from early in the book:

"The voice of forest water in the night, a woman's laughter in the dark, the clean, hard rattle of raked gravel, the cricketing stitch of midday in hot meadows, the delicate web of children's voices in bright air--these things will never change.

"The glitter of sunlight on roughened water, the glory of the stars, the innocence of morning, the smell of the sea in harbours, the feathery blur and smoky buddings of young boughs, and something there that comes and goes and never can be captured, the thorn of spring, the sharp and tongueless cry--these things will always be the same.

"The tarantula, the adder, and the asp will also never change. Pain and death will always be the same. But under the pavements trembling like a pulse, under the buildings trembling like a cry, under the waste of time, under the hoof of the beast above the broken bones of cities, there will be something growing like a flower, something bursting from the earth again, for ever deathless, faithful, coming into life again like April."

I have not added You Can't Go Home Again to my recommended books category, because the best parts of it are too thinly scattered through a rather prosaic storyline, but the excerpts were certainly worth finding and blogging.

Text credit to Project Gutenberg Australia - with many thanks to them for saving me hours of transcribing for these six related posts.
Reposted from 2012 (has it been that long already?) for my neighbor Ben, who won't have time to reread this book for many years yet.
See also: