A reminder that ancient statuary was often painted 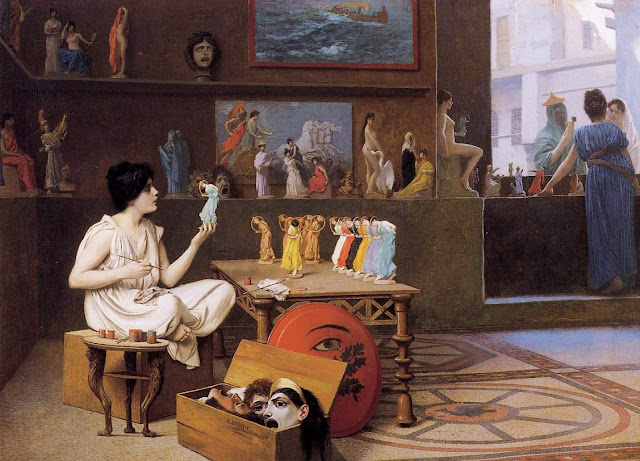 The painting is by Jean-Léon Gérôme - Painting Breathes Life into Sculpture, 1893.


Although it was initially thought that Greek statues were mostly unadorned white marble, by the early 19th century the systematic excavation of ancient Greek sites brought forth a plethora of sculptures with traces of multicolored surfaces. Some of these traces are still visible to the naked eye even today, though in most examples the remaining color has faded or disappeared entirely once the statues were exposed to light and air. In spite of this overwhelming evidence for painted statues, influential art historians such as Johann Joachim Winckelmann so strongly opposed the idea of painted Greek sculpture that proponents of painted statues were dismissed as eccentrics and their views largely dismissed for several centuries. It wasn't until published findings by German archaeologist Vinzenz Brinkmann in the late 20th century and early 21st century that painted Greek sculptures became an established undeniable fact. Using high intensity lamps, ultraviolet light, special cameras, plaster casts and certain powdered minerals, Brinkmann was able to scientifically prove that the entire Parthenon, including the actual structure as well as the statues, was in fact painted. He furthermore was able to reveal the pigments of the original paint and has created several painted replicas of Greek statues that are currently on tour throughout the world. Also in the collection, are replicas of works from other Greek and Roman sculptures showing that the practice of painting sculpture was wide spread and in fact the normative practice rather than the exception in Greek and Roman culture.

More at the Wikipedia entry.  Image found at Miss Folly, via. 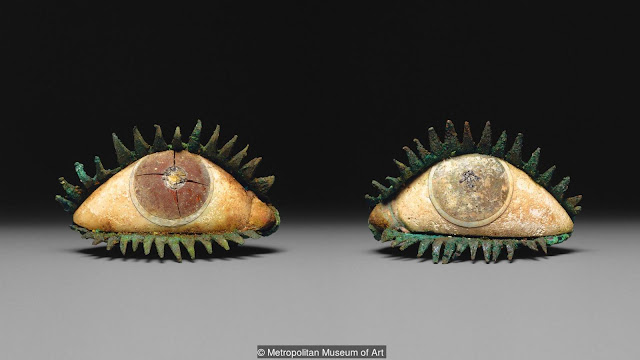 Reposted from 2010 to some text and add two images from BBC Culture:


Even bronze statues would have been much brighter than their dark brown appearance suggests today: bronze acquires a patina over time. What we see as a uniform greenish-brown head would once have been gleaming bright, almost golden. Hair would have been painted dark and the flesh might well have been painted too. The eye sockets of ancient statues are often empty, because the eyes were made separately, and they have been lost over time. There is a magnificent pair of Greek eyes in the Metropolitan Museum of Art in New York [above], made of bronze, marble, quartz and obsidian...

And the Greeks are not the only ones whose statues were painted: the Romans were similarly enthusiastic about brightening up their marble. Paolo Liverani, of the University of Florence, has worked on a project to recreate the statue of Augustus of Prima Porta [below]. The emperor’s statue was discovered in 1863, and showed traces of the paint which once decorated it. A cast of the statue, its polychromy restored (and, in part, imagined), now stands in the Vatican Museum. 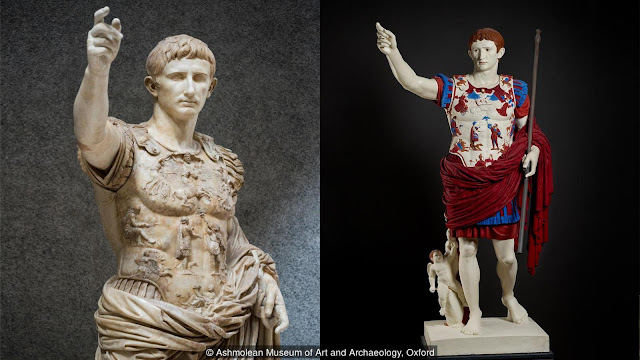 And finally this interesting tywk:


Winckelmann was a particular fan of Roman marble copies of Greek bronze statues: the Romans often copied Greek originals in marble. You can tell it is a marble copy of a bronze if a figure is leaning on something: a tree trunk, or a staff, for example. Or perhaps there is a little chunk of marble joining the two legs together.  Marble lacks the tensile strength of bronze, so it requires extra support to keep the figures stable.