The joys of exploring the OED 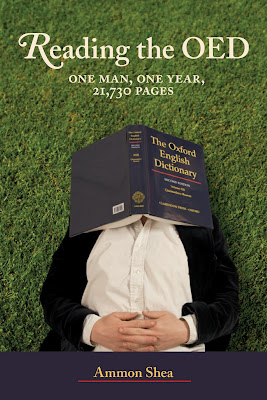 My acquaintance with the Oxford English Dictionary began in college when my part-time job was as a librarian, manning the checkout desk. Near my desk was the multivolume, red-bound 1960s version. When students weren’t using the library (which was quite frequently), I had the satisfaction of being paid $1.50/hour while browsing through the OED.

It was probably 5 years or so later that the compact edition was released – 16,000 pages compressed using such an unimaginably small font that I needed the magnifying glass even when I was younger. It was one of my first book purchases when I was in graduate school, and I have kept that compact OED in my office ever since.

So it was with some interest that this year I encountered a flurry of online reviews of a book entitled Reading the OED. One Man, One Year, 21,730 pages, by Ammon Shea (Penguin Books, NY, 2008). Our library had 4 copies and only 6 requests, so it was available rather quickly.

I'm probably one of the few reviewers to offer an unenthusiastic assessment of the book. As a scholarly work, it's frankly underwhelming. It's a quick read - only 223 pages in a relatively large font, with a dozen pages left totally blank (when I see that I always suspect publishers of padding, but perhaps there’s a typographical reason for needing to start each chapter on the recto rather than the verso.)

The book is formatted into 26 chapters (you can guess the chapter titles), each with 3-4 pages of seemingly random thoughts about books, dictionaries, lexicographers, or the author’s often curmudgeonly approach to his personal life. If you want to learn about the OED itself, there are better sources, including Simon Winchester’s The Professor and the Madman, or perhaps his The Meaning of Everything.

The principal value in Shea's book is his selection of interesting words – again 3-4 pages per chapter with a couple dozen words accompanied by abbreviated definitions. Even here the author inserts a rather misanthropic view of interpersonal relationships, especially with regard to children. But the words themselves are a joy to encounter. As Shea acknowledges, these are not words to “know” in the sense that one would want to use them in conversation or even in writing; there’s satisfaction enough in just knowing the words exist.

Herewith some of my favorites...

Agathokakological – “made up of both good and evil.” Which prompted me to look up the “agatha” part, because obviously the “kako” part was the evil (think “caca”). And sure enough, there it was in Greek: alpha/gamma/alpha/theta/omicron/sigma = good. From which an “agathodemon” is a good deity, and “agathism” is the idea that everything tends toward a good outcome [interestingly, not the same as “optimism” which implies that all things are CURRENTLY for the best – I never knew that]. And of course this new knowledge gives me an appreciation for Agatha Christie’s parents’ naming skills.

Ambisinistrous – “having two left hands; clumsy.” The literal (but unappreciated) opposite of “ambidextrous” which is used as “skilled with both hands” but etymologically means both hands are right hands.

Apricity – “the warmth of the sun in winter.” Because “apricate” is Latin for “to bask in the sun.”

Balaamite – “one who is religious for the sake of monetary gain.”

Bayard – “a person armed with the self-confidence of ignorance.” I certainly would like to work this into a blog post. Wish I had known about it during the pre-election season.

Consenescence – “growing old together.” A wonderful term applicable to marital bliss if one ignores the second meaning of “general decay.”

-ee suffixes – a "beatee" is someone who has been beaten, boree is one who is bored, a "flingee" is a person at whom something is flung, a "gazee" one who is stared at, and a "laughee" someone who is laughed at. With Thanksgiving coming later this week, remember that a “sornee” is “one who has been sponged upon by others for free food or lodging.”

Gobemouche – “one who believes anything, no matter how absurd.” Definitely blogworthy.

(more later. It's getting late)