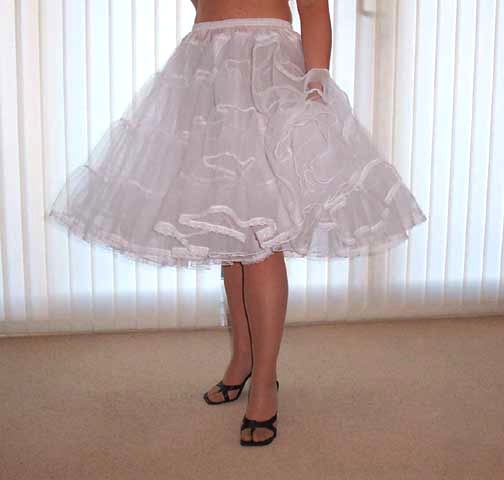 You learn something every day. A BBC article about a new fashion trend of exposing underwear as outerwear included this tidbit:


When I was at school, the whispered warning "Charlie's dead" alerted a girl to the fact that her petticoat was showing...

There are various theories as to where that curious phrase came from. It seems to date from World War II, and my own favourite explanation is that in the 1940s, the window-blinds were lowered whenever there was a death in the house.

The dipping half-slip was like a lowered window-shade. More fanciful versions involving Bonny Prince Charlie or Charles II, are, I am afraid, historically implausible...

A Google search yields about 3000 hits for "Charlie's dead," including some referring to expired pet goldfish. These are the only relevant bits I could find ...

In my youth, we used to say "It's raining in Paris" in such circumstances. I have no idea why. The French said "Tu cherche une belle-mere" (you're looking for a mother-in-law) which makes much more sense.

"It's snowing down south" is listed in Eric Partridge's "Dictionary of Catch Phrases American and British." Partridge says it's Australian, current during the late 1940s and the 1950s "but rapidly less since then," and it may have reached Australia from the U.S. It was known in the U.S. as early as the 1930s, Partridge says.

found some other sayings: Mrs White is out of Jail, Saturdays longer than Sunday.

"Your cat's died!" was an expression said when I was a child to mean a girl/ladies petticoat was showing below their skirt/dress or it meant a boy/man's trousers were too short. [???]

And a restaurant on Petticoat Lane details the Prince Charlie/King Charles I/II theories.

Addendum: I posted the above in 2008.  Now in 2016 I finally decided to see what the Dictionary of American Regional English has to offer on the subject.  In 1965-1970 they tallied about 800 responses to the question "What expressions are used around here to warn a woman slyly that her slip is showing?"  The most common responses were "You're slipping" or "Your slip is showing."  Of interest, I note "Got your P.H.D." (presumably "petticoat hanging down"), various references to "snow," to "Mrs. White," to "daddy/father/papa," and to "cotton."  There were only 5 citations to Charlie ("dead" or "showing"), which reinforces my own opinion that the phrase has a British rather than American etiology.