Raised in Pennsylvania, Dr. Paul is a retired OB/GYN specialist (Duke University) who has been a congressman from the Galveston area of Texas for the past 20 years. He is best known for being a strict advocate 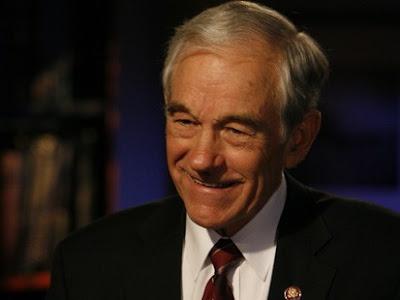 of the Constitution; he therefore favors strictly limiting the power of the federal government. To that end he has advocated actually shrinking the federal bureaucracy by eliminating agencies such as the Department of Education.

Dr. Paul is the only candidate for president (in either party) who advocates immediate cessation of the war in Iraq; more than that, he would favor bringing home all U.S. troops stationed overseas (in Korea, Europe etc). He is not anti-generic-war (he is ex-military, retired flight surgeon), but feels this war was unjustified and has been poorly managed, that it is creating more ill-will and terrorists, and that we cannot financially afford it. In terms of foreign policy he is best described as a "non-interventionist" - not an isolationist.

In terms of monetary policy, Dr. Paul in his congressional role on the House Banking Committee and finance committees has spoken out strongly against the role played by the Federal Reserve in inflating our currency. He is a "fiscal conservative" who strongly decries deficit spending and the enlargement of the federal deficit. He has never voted to raise taxes and indicates that if the federal budget can be trimmed by decreasing military and bureaucratic expenditures that he would then advocate eliminating personal income taxes (and the IRS).

This Venn diagram greatly oversimplifies complex issues, but it at least serves to provide general guidelines as to where Dr. Paul's positions lie in relation to the political right, the political left, and the libertarians: 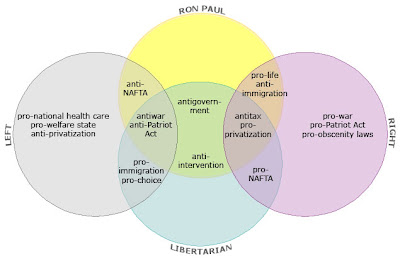 In subsequent posts I hope to provide more detail on his policies and positions. In the meantime, those interested might consider visiting some of these websites:

a good summary of his positions - http://www.the-daily-record.com/news/simple_article/2825122

forums where all manner of items are discussed - http://www.ronpaulforums.com/