A wattle is a fleshy caruncle hanging from various parts of the head or neck in several groups of birds and mammals. A caruncle is defined as 'A small, fleshy excrescence that is a normal part of an animal's anatomy'. Within this definition, caruncles in birds include wattles, dewlaps, snoods and earlobes. Wattles are generally paired structures but may occur as a single structure... known as a dewlap. 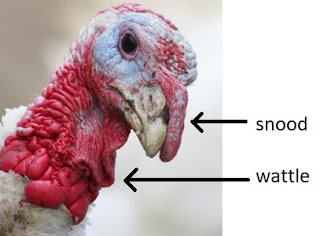 Turkeys' wattles often take a turn for the redder when they feel enlivened, overwhelmed, fearful, angry or alarmed. Whether something good or bad gets their attention, that rush of feeling often makes their wattles temporarily switch color. Apprehension also sometimes makes their wattles bluish.

Although female turkeys do indeed possess wattles, they're easy to miss. This also is the case with several other turkey physical features, namely both snoods and caruncles. Snoods are extremely easy to see right above male turkeys' beaks. Caruncles are noticeable on the males' lower necks, as sizable mounds. These things are simply a lot less apparent in female specimens. The wattles specifically are much lighter and less striking in females.

The word dates to the 1500, but it's origin is uncertain.