The Judaism of Bernie Sanders 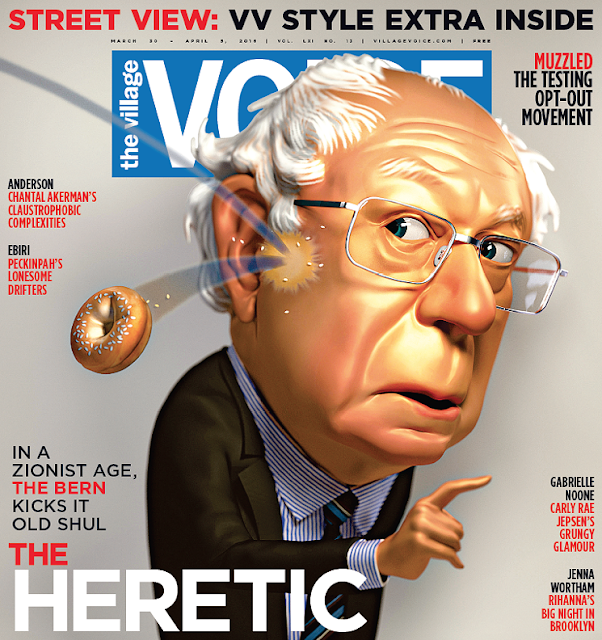 I'm trying to minimize coverage of politics during this election cycle, but I thought this article in The Village Voice offers some insight into both a candidate and a religion:


Commentators who had previously criticized Sanders for downplaying his Judaism were underwhelmed by his mostly secular response. "Sanders may be focused on uniting Americans for a better future," argued the Jewish Telegraphic Agency newswire, "but some Jews would clearly like to hear him acknowledge his past."

Those Jews were eventually given voice through the unlikely agency of Anderson Cooper, who, during a March debate in Michigan, referred to Jewish leaders who were "disappointed" that Sanders keeps his Judaism "in the background." "Look, my father's family was wiped out by Hitler in the Holocaust," came Sanders's reply. "I am very proud of being Jewish, and that is an essential part of who I am as a human being." Finally, Sanders was giving commentators what they seemed to want to hear from a Jewish candidate — a reference to the Holocaust. Vox's Zack Beauchamp said the response "nearly brought me to tears."

We shouldn't be surprised by this insistence that Bernie invoke the Holocaust: Museums, school curricula, and the culture generally have so diligently cultivated the image of Jews as primarily survivors or victims of the Holocaust that we've learned to see this, and not all that solidarity talk, as properly Jewish. But Sanders carries on a Jewish tradition much longer, and more sacred, than merely paying lip service to the Holocaust. His every utterance about universal health care, economic inequality, and social justice relentlessly embraces Judaism; it's just a Judaism many people no longer recognize. Bernie Sanders is a Jew of a different era — the kind of Jew that Zionists would very much like us to forget...

When pundits complain that Sanders is not being publicly Jewish enough, what they are really complaining about is his refusal to fall in line with the philosophy that has come to define Jewish life in America. They are disappointed that Sanders has not aligned himself with Zionism...

And yet it is the non-Zionist Sanders who is criticized for insufficient faith, even as wealthy right-wing Zionists ostentatiously parade their donations to Holocaust Museums and prestigious congregations. These gestures are supposed to fulfill the sort of public obligation Judaism imposes, but next to Bernie Sanders's dogged agitation for universal equality and justice, decade in and decade out, Zionist chest-thumping looks like a cheap substitute.

This contrast was at its starkest when Sanders declined the opportunity to join every other presidential candidate in addressing Zionism's most exalted assembly: the annual convention of the American Israel Public Affairs Committee (AIPAC). Instead, he addressed the question of Israel at a high school in Salt Lake City, Utah, in a speech that included such taboo-breaking observations as "There is too much suffering in Gaza to be ignored."

Such heresy reminds us of an earlier Judaism. When Sanders says, "We are living in a world which worships not love of brothers and sisters, not love of the poor and the sick, but worships the acquisition of money," he is not hiding his religion, but espousing it. He is evangelizing. And if his gospel is going to catch, it will most likely be among the young people who have flocked to his campaign.