Details about "The Great Escape" 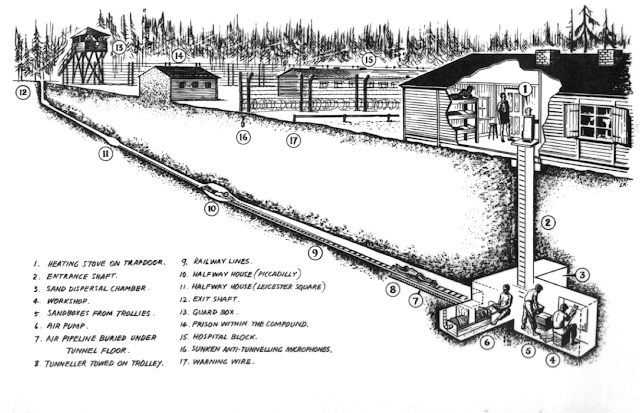 A couple brief excerpts from a detailed account in The Telegraph:


The subsequent events, thanks to numerous books and the 1963 Hollywood epic The Great Escape, have become the stuff of legend. However the real story had nothing to do with Steve McQueen on a motorbike and over the top derring-do by a few men – in reality some 600 were involved.

Despite being meticulously planned by the committee known as the X Organisation, the escape was a far messier affair than we have previously been led to believe. Events unfolded in chaos with numerous hold-ups and tunnel collapses. Some pushed their way in line; others fled their post altogether.

Now, after corresponding with and interviewing survivors, and seven painstaking years of trawling through historical records in archives across Europe, prisoner-of-war historian Charles Rollings throws new light on the night of the ‘Great Escape’.


Two weeks later the remaining prisoners at Stalag Luft III receive news that 42 of the recaptured escapees had been shot “resisting arrest or making further escape attempts after arrest”. When the list of victims was posted it amounted to 47 names, and a few days later another three were added, bringing the total to 50. Among the dead were 25 Britons, six Canadians, three Australians, two New Zealanders, three South Africans, four Poles, two Norwegians, one Frenchman and a Greek. A further 23 were sent back to various other Nazi prison camps. Only three of the escapees - two Norwegians and a Dutchman - made it home.