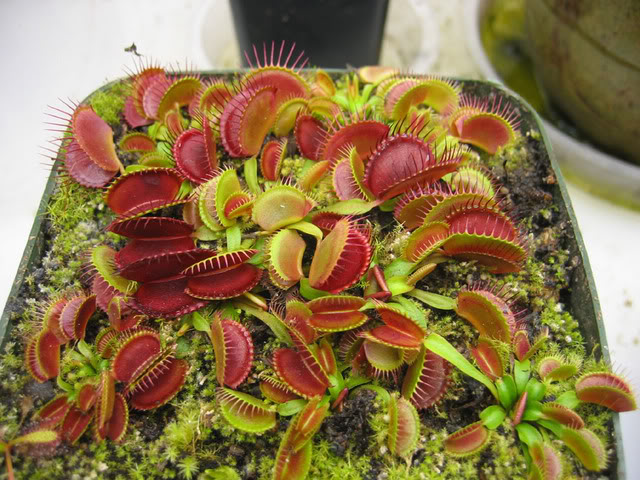 Several nights ago I was reading the February issue of Smithsonian magazine, and encountered an interesting article about Venus flytraps.  I was surprised to learn that the distribution of this plant is limited to a small area along the Atlantic coast of the Carolinas, and despite this it is so famous that most people are quite familiar with it:


Thomas Jefferson collected them (during his stay in Paris in 1786, he requested a shipment of the seeds of “the Sensitive Plant,” perhaps to wow Parisians). A few decades later, Napoleon Bonaparte’s wife, the green-thumbed Empress Josephine, grew flytraps in the gardens of the Château de Malmaison, her manor house.

The plant was also the model, more or less, for "Audrey Junior," the carnivorous star of Little Shop of Horrors.

Now, about that name.  Smithsonian gives part of the story -


Live plants were first exported to England in 1768, where people referred to them as “tipitiwitchets.” A British naturalist, John Ellis, gave the plant its scientific name: Dionaea is a reference to Dione, mother of love goddess Venus (some believe this was a bawdy anatomical pun about the plant’s half-closed leaves and red insides), and muscipula means “mousetrap.”

I tracked down the rest of the story at Tipitiwitchet Explained:


Naturalists have long puzzled over the name Tipitiwitchet, given by John Bartram...  'Tippet' is a fur collar, in ordinary English, and Marlowe's 'Hempen tippet', a hangman's rope, is a poetic embellishment... A 'Twitch' is a noose for recalcitrant horses. 'Twitchers' are either pincers or tight boots; and, of course, 'Twitchety' is nervous, fidgety, jerky...

All these terms... parallel the term 'Snatch-box' that Partridge records as used for vulva in popular parlance.... Further, more specifically American, although the technique must be more widespread, a 'Twitch‑up' is a trap for small animals especially rabbits, consisting of a noose attached to a bent stick or sapling that springs upward when tripped.

Finally, vestiges of Elizabethan (and later) English... are heard from senior citizens at a mid-coast Maine hamlet - far from Tipitiwitchet country. They speak of 'Twitchet Avenue', disregarding both its present sanitized label and its presumed current lack of saleable feminine attractions...

And a final confirmation re the etymology from the website of the International Carnivorous Plant Society:


For while you might expect a scientist to express wonder or astonishment upon seeing the plant, Bartram wrote to Collinson on 29 August 1762 that "my little tipitiwitchet sensitive stimulates laughter in all ye beholders".  Surely, surely this suggests that when Bartram would show off his plant, he did so in such a way to inspire laughter. This seems to indicate that he was showing off the plant with rude commentary!..

The truth was exposed by a reading of a letter Peter Collinson (in England) sent to Bartram... He still hoped to get seeds from Arthur Dobbs... [but] Dobbs (73 years old) was no longer quite so interested in things such as this plant--as remarkable as it was--because he had just gotten married to a very, very, very young [15-year-old] girl.


"It is now in vain to write to him for seeds or plants of Tipitiwitchet now He has gott one of his Own to play with..."

And perhaps by ?coincidence or through etymological innocence -


"Beatrix Potter did use a similar word - tippity-twitchet - to describe a little girl, “a funny specimen ... a pretty little imp of eight or nine with yellow curls, in the neatest of little blue and pink combination knickerbockers riding a bicycle. A very tippity-twitchet.”

Reposted from 2010 to add information from an article in The Atlantic:


The first impulse sets a secret timer, and what the fly does in the next 20 seconds will determine its fate. If it avoids the hairs, it will live. If it bumps a second one, it sets off another electrical impulse, which raises the trap’s calcium levels above a critical threshold. The plant responds by sending water into its leaves, which rapidly change shape from convex (bent outwards) to concave (bent inwards)...

The third impulse raises the trap’s calcium levels even further, prompting it to produce a hormone called jasmonate. In many plants, jasmonate is a touch hormone, which is released by wounds and injuries and coordinates programs of defense and repair. In the Venus fly trap, jasmonate doubles as a carnivory hormone. It primes the gland cells in the trap to start making digestive enzymes, which they finally do once they detect a fifth electrical impulse...

The fluid inside the trap becomes incredibly acidic, dropping to a pH of 2...

... the trap is also lined with chemical sensors. These can detect the chitin in the fly’s shell and the substances in its blood. So, as long as the plant can taste something to digest, it will keep digesting.

Addendum:  A tip of the blogging hat to an anonymous reader who sent along the link for a podcast at Criminal about the underground black market for Venus flytraps [warning: depressing]--


Every year for the past few years, tens of thousand of flytraps have gone missing – from the wild, from gardens, from nurseries. And, really, nobody knows where they go. What’s cropped up in rural North Carolina is essentially a Venus Flytrap crime ring — with lackies, middle men, and a mysterious end buyer who’s perpetuating the market.