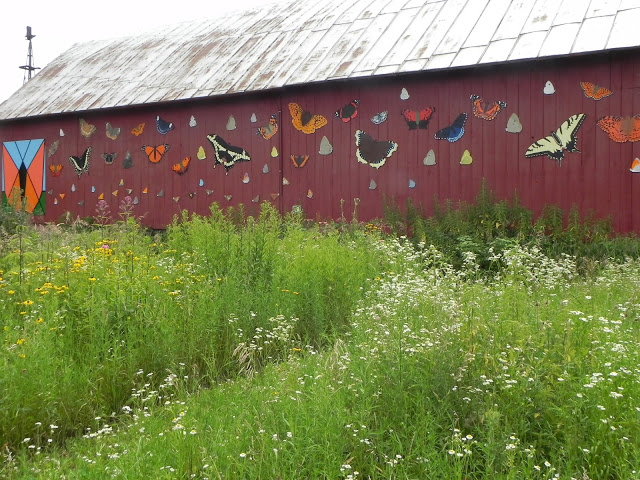 I first reported on the remarkable barn of the Sonnenberg family back in 2013, updating with the above photo in 2015.  This year it was time to repaint the barn, so I returned to meet old friends and document the process. 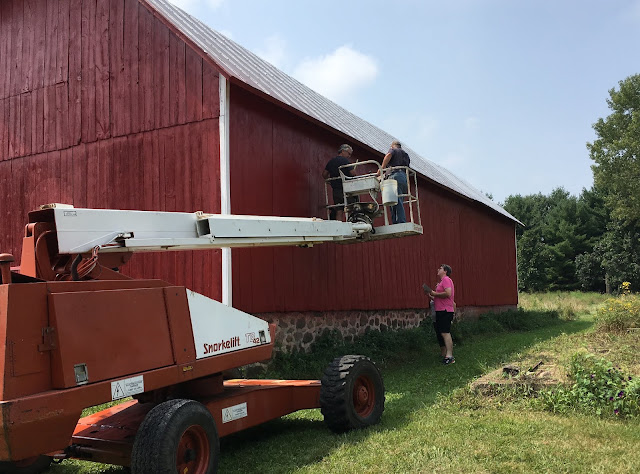 The first step had already been undertaken by the family, who had contracted with a local Amish family to repaint the barn.  That required removal of the butterflies and the use of some heavy equipment to get them down and put them back up. 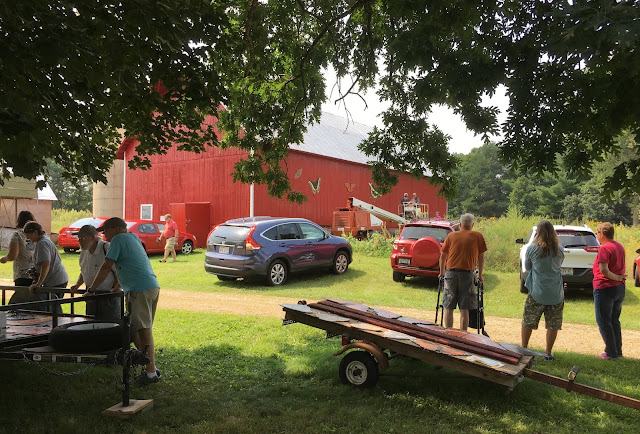 While one crew worked at the barn, others gathered in the front yard to get the butterfly appliques ready. 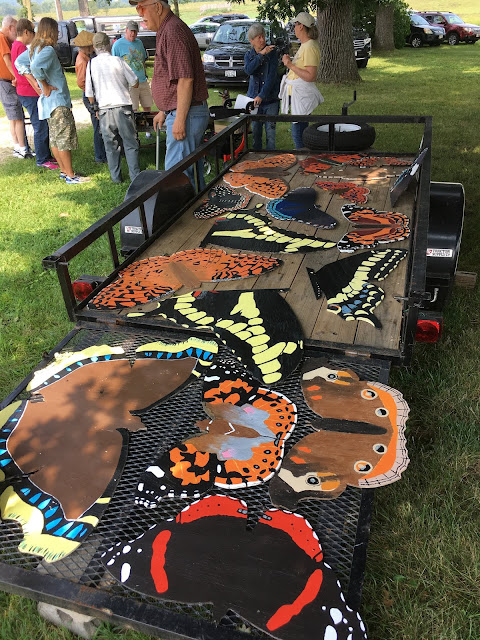 The butterflies had been repainted during this past winter.  Here are the larger ones (Red Admiral, Mourning Cloak, Painted Lady, Buckeye, swallowtails, fritillaries, etc.  All of the wooden appliques had been hand-drawn and cut at a scale of one foot to one inch of real life size.  The hand-repainting was done by family members, neighbors, and friends from the local church, who gathered this past weekend for the festivity of remounting them on the newly-painted barn. 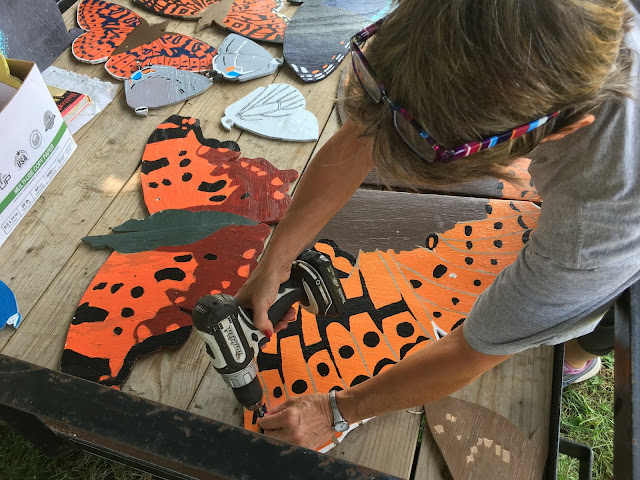 In the shade of the front yard trees, screws were preset into the wings to speed up the work of the crew at the barn. 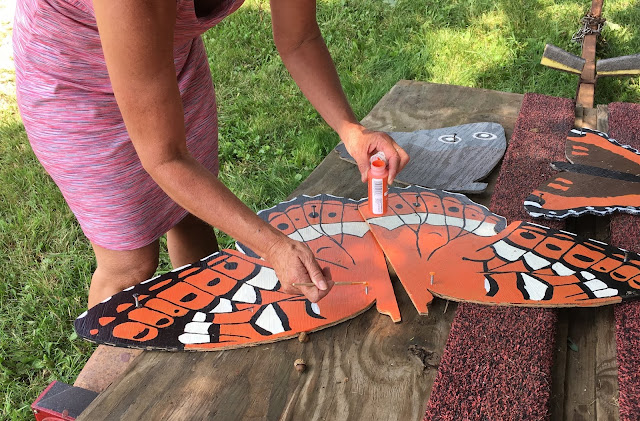 I was particularly impressed that some took the time to touch up the screw heads to match the underlying wing color - a detail that would be invisible to people driving by on the road. 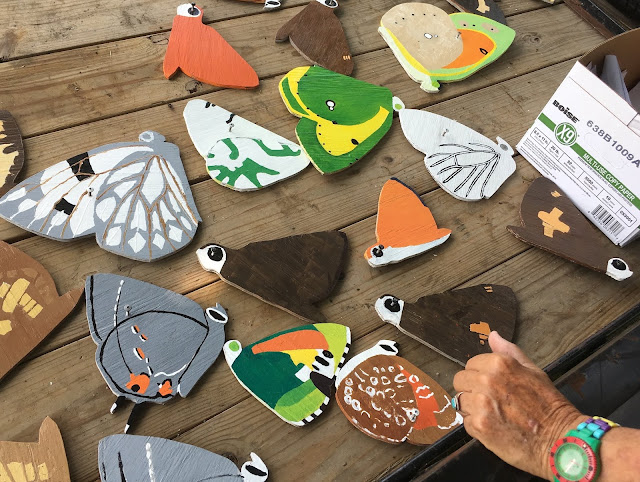 The small butterflies (skippers, blues, coppers, hairstreaks) are depicted from the side, with the wings folded up over the torso, in part because they typically rest in that position, and because the undersides of the wings often have the definitive markings. 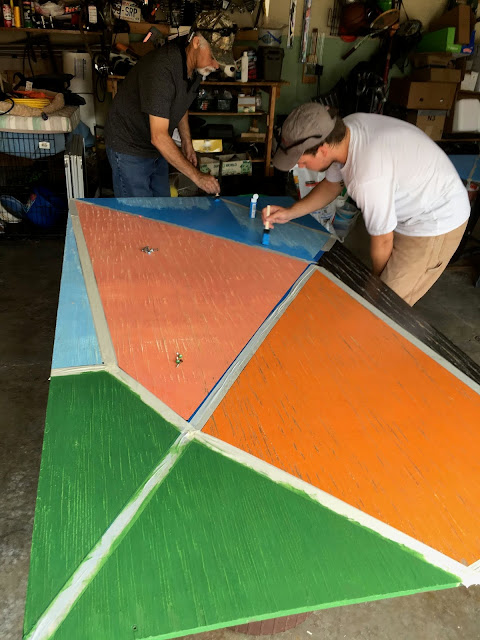 While that was going on in the front yard, another crew in the garage was repainting the barn quilt.  The Sonnenberg farm is registered as part of the Marquette County Barn Quilt Trail.  This particular barn quilt depicts a stylized butterfly (only half of the quilt in this photo; see top photo for the entire). 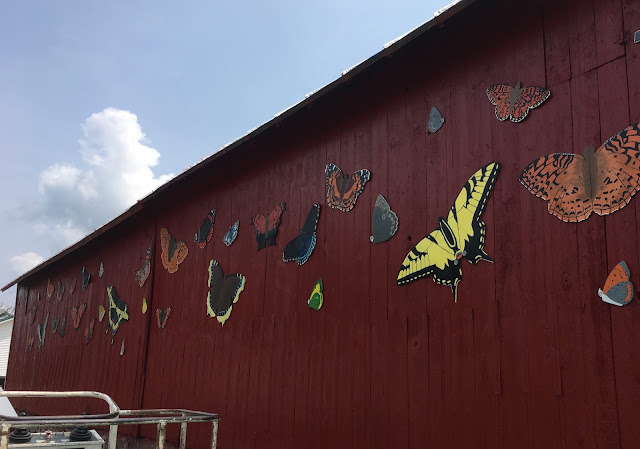 As the afternoon went by, the butterflies landed on the wall.  What passers-by on the road don't realize is that the ones on the barn wall are not just Wisconsin butterflies, but 50 different species that have been documented on this particular farm. 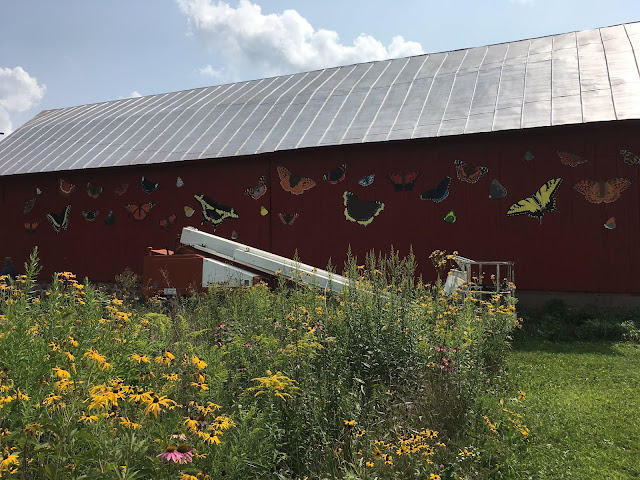 That impressive diversity is attributed in part to the owners' decisions to maintain large patches of the farm in native plants and undisturbed habitat. 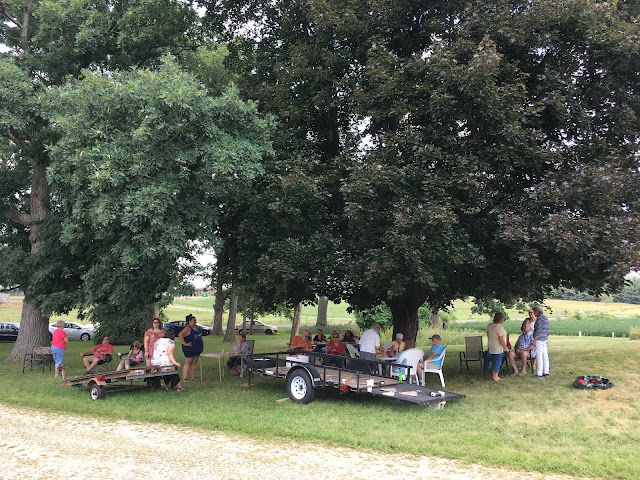 As the work neared completion, participants gathered in the house and the front yard for an old-fashioned bring-a-dish-to-pass picnic.  Those magnificent trees reflect the age of the farm, which has been in the same family for over a hundred years.  This is the fourth generation to actively farm this land. 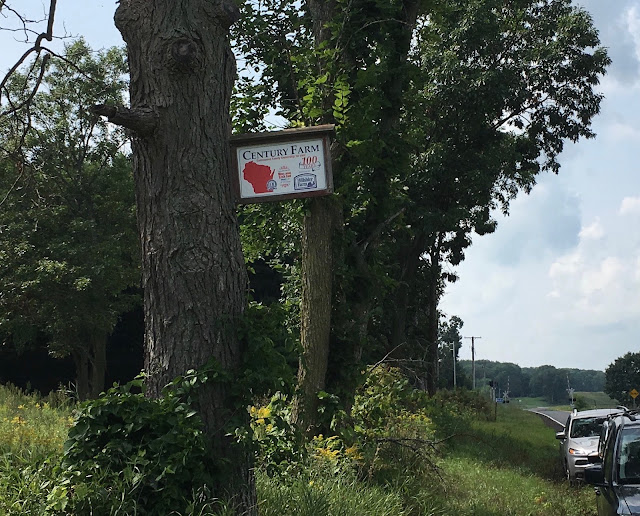 The state of Wisconsin recognizes "century farms" that not only have been active for a hundred years, but have been maintained by descendants of a single family during that time.  Wisconsin became a state in 1848, so the program was started in 1948 and currently includes about 9,000 farms located at some of the best sites that pioneering families could find in the early statehood years. 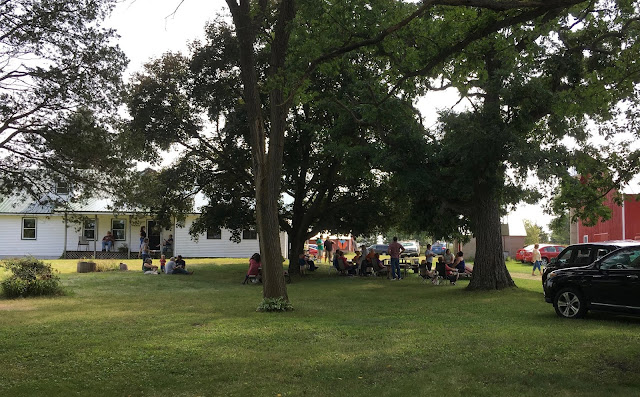 There are lots of ways to spend a summer afternoon, and lots of places to picnic, but not many better than the front yard of a historic farm; it refreshed some now-vague memories of my childhood years visiting grandparents on their old farm in southern Minnesota.  This gathering of friends and family for a communal project reminded me in many ways of a classic "barn-raising."  It was a delightful experience.