Severed foot in the Garden of Earthly Delights 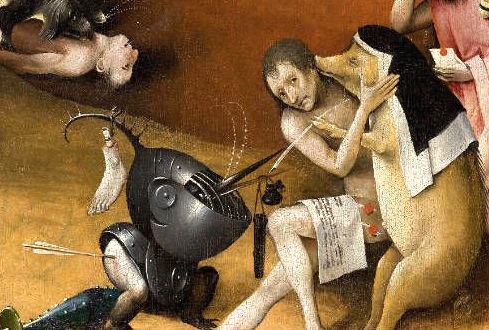 It has been almost two years since I've been able to add any material to the 29 posts in TYWKIWDBI's category of severed feet.   So, a tip of my blogging cap to Miss Cellania at Neatorama, who found one in Bosch's The Garden of Earthly Delights.

A quick search led me to a claim that "the severed foot is one of the most repeated in the Bosch's panel paintings, appearing in several works, as in the Garden of Delights and in the central panel of the Temptation of St Anthony triptych in Lisbon." Although this is offered as support for the premise that Bosch was depicting sequelae of ergot poisoning, the one pictured above appears to me to be traumatically severed, not withered by occlusive vasculitis.

And speaking of severed feet, by an improbable coincidence, the Washington Post is reporting this week that severed feet continue to wash ashore in the Pacific Northwest.  Those were the odd events that prompted me to create this category for TYWKIWDBI back in 2008.


Sixteen of these detached human feet have been found since 2007 in British Columbia, Canada, and Washington state. Most of these have been right feet. All of them have worn running shoes or hiking boots. Among them: three New Balances, two Nikes and an Ozark Trail.

The most recent one turned up earlier this week.

More information and a video at the link, but no explanation for the phenomenon.

Reposted from 2016 to provide some addenda:
I continue to encounter the odd report of severed feet (and longtime readers occasionally send me links of such incidents).  Rather than put new reports on the front page of the blog, I'm going to convert this post into a linkdump.

Via Nothing to do with Arbroath:


"Three severed human feet found in and around a park are likely to have been educational medical exhibits or from a private collection, an investigation has concluded. The first foot was found by dog walkers in Weston Park East Bath, Somerset, in February. A second was discovered in the garden of a property in Weston Park in July and a third in a garden in nearby Cranwells Park a month later. Avon and Somerset Police said they found no evidence of foul play..."

A website that sells severed animal feet (dried, salted, or preserved in alcohol).

Severed feet as a theme for Cake Wrecks.

At Rio's 2016 summer Olympics: "A beach goer Wednesday discovered human body parts that had washed up on the shore, right in front of the Olympic Beach Volleyball Arena on Rio's famed Copacabana beach. A dismembered foot and another body part still unidentified was found..."


"The freelance journalist told the Bath Chronicle: "It was just like CSI. There were a few of us out walking our dogs and then a lady came running over to find us and said there's a foot in the hedge." 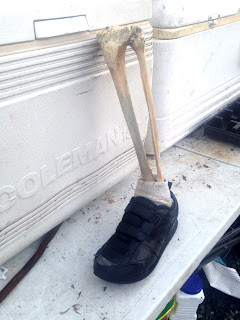 "After a shoe with a human foot inside turned up on a dock in Charleston, South Carolina, investigators are trying to figure out whose it was and how it got there." (May 2017)

A severed foot in a tennis shoe was discovered in a county park in St. Louis, Missouri.  The park was adjacent to the Mississippi River, so it could have come from an aquatic incident.

A tip of the blogging cap to long-time readers Phil and Bub, who remembered this series of posts and sent me a link about yet another foot washing ashore in Canada (13 since 2007...).  This one was remarkable for having the tibia and fibula still attached (photo at right).

I was pleased to see in Neatorama today a link to a Wikipedia page that provides comprehensive coverage of this topic (at least as it relates to the Pacific Northwest). 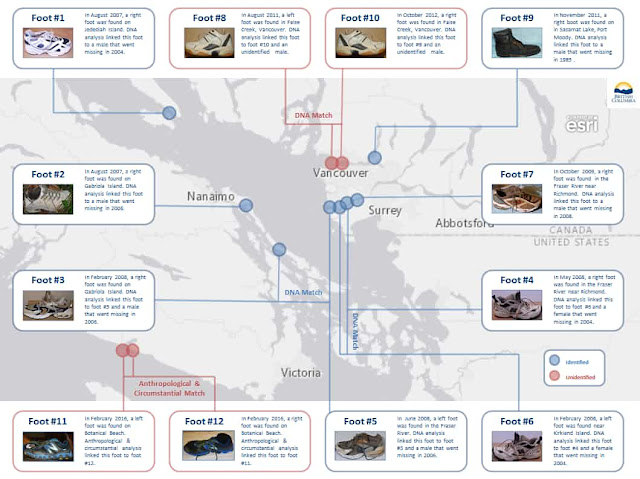 Another update from British Columbia after the discovery of a fourteenth severed foot.

A 2019 report of a fifteenth severed foot from the Pacific Northwest, with a reasonably concise and comprehensive summary of all the available evidence from past reports.