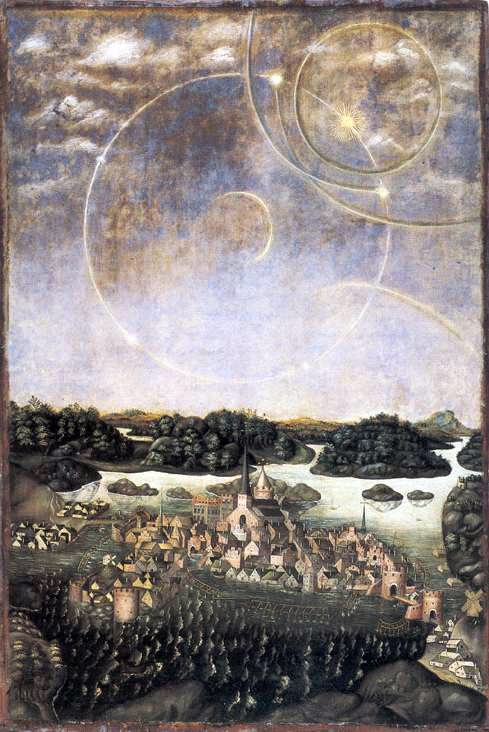 Excerpts from the Wikipedia summary:


Vädersolstavlan (Swedish for "The Sun Dog Painting") is an oil-on-panel painting depicting a halo display, an atmospheric optical phenomenon, observed over Stockholm on April 20, 1535. It is named after the sun dogs (Swedish: Vädersol, "Weather sun") appearing on the upper right part of the painting. While chiefly noted for being the oldest depiction of Stockholm in colour, it is arguably also the oldest Swedish landscape painting and the oldest depiction of sun dogs...

The medieval urban conglomeration, today part of the old town Gamla stan, is rendered using a bird's-eye view. The stone and brick buildings are densely packed below the church and castle, which are rendered in a descriptive perspective (i.e., their size relates to their social status, rather than their actual dimensions). Scattered wooden structures appear on the surrounding rural ridges, today part of central Stockholm...

According to the passage in the Vasa Chronicle, however, both Petri and the master of the mint Anders Hansson were sincerely troubled by the appearance of these sun dogs. Petri interpreted the signs over Stockholm as a warning from God and had the Vädersolstavlan painting produced and hung in front of his congregation. Notwithstanding this devotion, he was far from certain on how to interpret these signs and in a sermon delivered in late summer 1535, he explained there are two kinds of omens: one produced by the Devil to allure mankind away from God, and another produced by God to attract mankind away from the Devil — one being hopelessly difficult to tell from the other. He therefore saw it as his duty to warn both his congregation, mostly composed of German burghers united by their conspiracy against the king, and the king himself...

In the painting, the actual sun is the yellow ball in the upper-right corner surrounded by the second circle. The large circle taking up most of the sky is a parhelic circle, parallel to the horizon and located at the same altitude as the sun, as the painting renders it...

There's way more at the extensive Wikipedia page on old Stockholm and the science of the phenomenon.

Reposted from 2014 to add this photo of sun dogs I took just after dawn on this frosty Wisconsin morning: 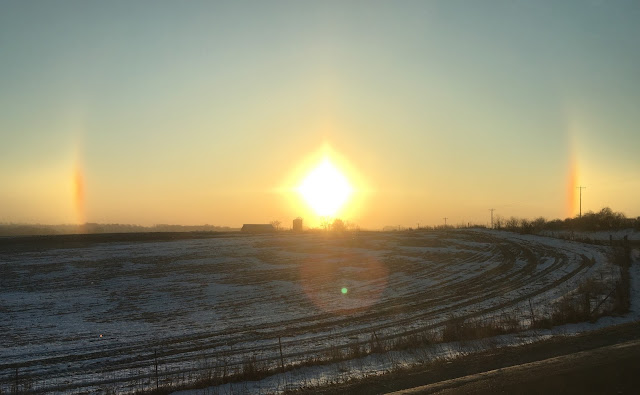 My photo with a cellphone camera doesn't capture the intensity of brightness of the two sun dogs, or the subtle light pillar extending above the rising sun.


The prelude to the Battle of Mortimer's Cross in Herefordshire, England in 1461 is supposed to have involved the appearance of a halo display with three "suns". The Yorkist commander, later Edward IV of England, convinced his initially frightened troops that it represented the three sons of the Duke of York, and Edward's troops won a decisive victory. The event was dramatized by William Shakespeare in King Henry VI, Part 3, and by Sharon Kay Penman in The Sunne In Splendour.