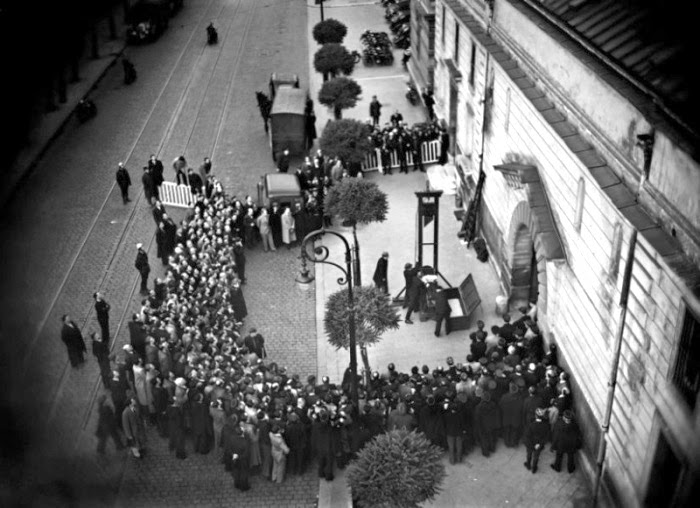 As described in Iconic Photos:


In the early morning of 17 June 1939, Eugène Weidmann bowed down before the blade of the guillotine, the last person to do so publicly. Weidmann was the last person to be executed before a crowd in France. He had been convicted of multiple kidnappings and murders, including that of a young American socialite...

In the days following the execution, the press was especially indignant at the way the crowd had behaved. Paris-Soir denounced the crowd as “disgusting”, “unruly”, “jostling, clamoring, whistling.” Among the sins the lofty paper found unforgivable was the crowd “devouring sandwiches”. More shockingly for the authorities, the unruly crowd delayed the execution beyond the usual twilight hour of dawn, enabling clear photographs — and one short film! — to be taken. The government regretted that public executions which were intended to have a “moralizing effect” now produced “practically the opposite results.” President LeBrun signed an order to hold executions only behind closed doors.

I doubt that public executions ever had a "moralizing effect."  I think they've always been part of the bread and circuses that governments provide.