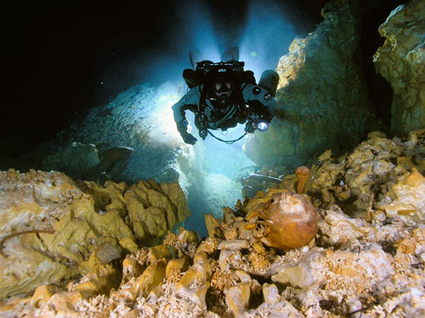 Explorers cave-diving in the Yucatan have found a human skull and the remains of a mastodon.  Excerpts from the National Geographic report:


Hoyo Negro was reached by the PET team after the divers travelled more than 4,000 feet [1,200 meters] through underwater passages using underwater propulsion vehicles, or scooters, which enabled them to cover long distances in the flooded cave system...

While the team of explorers conducted various dives for the purpose of mapping and surveying of this newly discovered pit, they noticed some peculiar bones sitting on the bottom. They first came across several megafauna remains and what was clearly a mastodon bone, while subsequent dives proved even more exciting when they spotted a human skull resting upside down with other nearby remains at about 140 feet [43 meters] depth...

Approximately 12,000 years ago, at the end of the Pleistocene epoch, Earth experienced great climatic changes. The melting of the ice caps caused a dramatic rise in global sea levels, which flooded low lying coastal landscapes and cave systems. Many of the subterranean spaces that once provided people and animals with water and shelter became inundated and lost until the advent of cave diving...

Radiometric dating of the human bones from Hoyo Negro will have to wait for now, but its location within the cave, and its position relative to the mastodon remains, are suggestive of its antiquity.

The results of this finding should definitively establish the existence of pre-Clovix humans in the New World.  I have always felt that Tom Dillehay's excavations at Monte Verde (Chile) had established a pre-Clovis timeline, but others have questioned his data.  The fact that Hoyo Negro has a skull - not just artifacts - should be definitive.

A flurry of articles appeared this morning, all reporting on the announcement of the results of extensive testing on the skull from the Mexican cave.  This from Discover:


Researchers announced today that Naia’s mitochondrial DNA (mtDNA) shares a genetic lineage with Native Americans. The lineage, known as haplogroup D1, derived from the northwest Asian haplogroup D and is unique to the Americas. Just as importantly, researchers found no genetic evidence suggesting Naia had ancestors from elsewhere. The Hoyo Negro find proves at least some ancestors of modern Native Americans had Paleoamerican features, effectively shutting down the theories that contended it was not possible. Speaking to reporters about the Hoyo Negro results on Wednesday, researchers involved with the study suggested that the craniofacial features specific to modern Native Americans could easily have evolved in a few thousand years, well after the first Americans were established here...

The divers also found [in the same cave] the remains of at least 26 animals, including sabertooth cats (Smilodon fatalis) and the elephant-like gomphothere (Cuvieronius cf. tropicus), both now extinct. At the time Naia lived, the enormous cavern — about 170 feet deep and 200 feet in diameter — was about five miles inland from the Caribbean and not submerged...

Because the underwater environment was poor for preserving bone collagen, researchers were unsuccessful in their attempts to date the bones of both human and animal remains using radiocarbon dating. Instead, the team relied on three separate methods. First, they aggregated data about sea levels in the area over the past several thousand years and determined when Hoyo Negro filled with water, concluding that the bones found there must have been deposited before then. The team also took note of the approximate extinction dates of the animal species found in the same area as Naia.

Finally, researchers conducted isotopic analysis of crystals growing on both human and animal bones found in the caves. They were able to determine when the crystals began growing and whether they were exposed to air or were underwater, allowing them to narrow down the age of the skeleton from 12,000-13,000 years old.

Other researchers on the international team sequenced the mtDNA extracted from one of the skeleton’s teeth; two additional labs independently performed the same sequencing to verify the results...

More at that link.  The Washington Post offered this graphic of the layout of the cave and its water levels:

Note the scale of the divers in relation to the cave and the extraordinarily difficult access.


The divers found her on a ledge, her skull at rest on an arm bone. Ribs and a broken pelvis lay nearby. She was only 15 years old when she wandered into the cave on the Yucatan Peninsula, and in the darkness she must not have seen the enormous pit looming in front of her...

The distinct morphology of the Paleoamericans is most famously found in the “Kennewick Man,” a 9,000-year-old skeleton discovered two decades ago along the Columbia River in Washington state. Facial reconstruction resulted in someone who looked a bit like the actor Patrick Stewart... Scientists theorized that he could have been related to populations in East Asia that spread along the coast and eventually colonized Polynesia. Under that scenario, more recent Native Americans could be descended from a separate migratory population.

Chatters said in an interview, “For 20 years I’ve been trying to understand why the early people looked different. The morphology of the later people is so different from the early ones that they don’t appear to be part of the same population.” He went on: “Do they come from different parts of the world? This comes back with the answer, probably not.”

One of the co-authors of the paper, Deborah Bolnick, an anthropologist at the University of Texas at Austin, said the new genetic tests support the hypothesis of a single ancestral population for Native Americans...

Why did Naia go into that cave and to her doom? Perhaps, Chatters said, she was in search of water in an era when the Yucatan was parched. Or perhaps she was following an animal. She would have been, under his scenario, a Wild Style person, a risk-taker. And so she went forward — into the cave, through the darkness, falling into the distant future.

I will certainly look forward to the upcoming televised National Geographic/Nova special on this discovery.