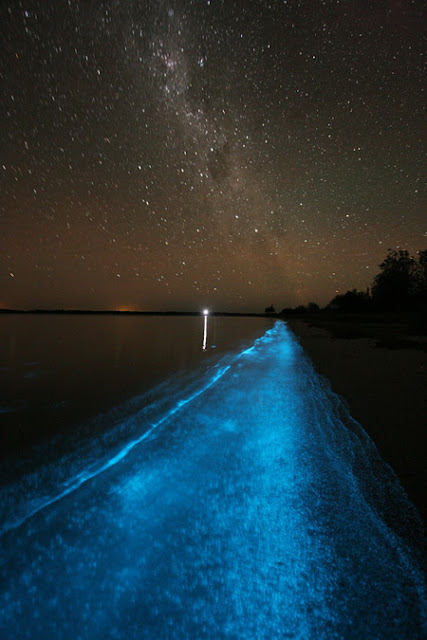 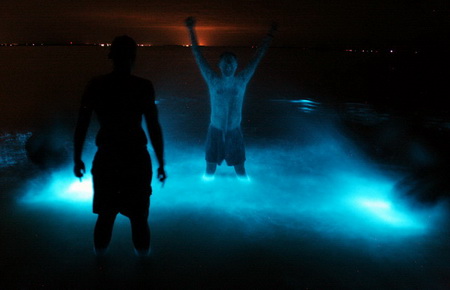 The photos above were taken at the Gippsland Lakes (Victoria, Australia), where in 2007 fires and floods resulted in massive amounts of nitrogen being washed into the lakes, which resulted in an algal bloom...


But this was not the blue-green algae that had appeared in the lakes before. Early analysis identified the cause of the green tinge as an algal outbreak of Synechococcus... As summer took hold at the end of 2008, what happened surprised everyone – a new species called Noctiluca Scintillans began to prosper, by feeding on the Synechococcus.

In contrast to the widespread bright green of the Synechococcus, Noctiluca Scintillans was visible during the day as localised murky red patches, often building up on sections of shoreline facing the wind during the day. At night though, Noctiluca Scintillans produced a remarkable form of bioluminescence (popularly referred to as ‘phosphorescence’) – the water glowing brightly wherever there was movement – in the waves breaking on the shore, in ripples in the water and wherever people played in the water.

You can read the rest of the story at Phil Hart's webpage and see additional photos in his gallery (via Neatorama).

Massive blooms of bioluminescent organisms can produce "milky seas" that can be seen from satellites, as shown in this image from Chemical and Engineering News: 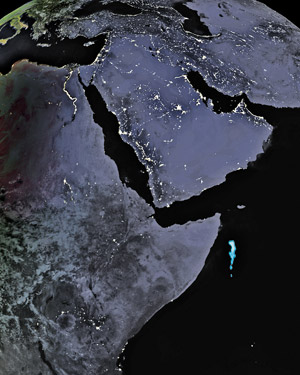 "Generated most likely by the bacterium Vibrio harveyi, this awesome display of flamboyant biological chemistry happened on a vast scale: The researchers estimate that it took a bloom of 40 billion trillion (4 X 1022) bioluminescent cells to generate the milky sea that the Lima had encountered."

Reposted from 2011 to add this video of bioluminescence in the Wadden Sea.