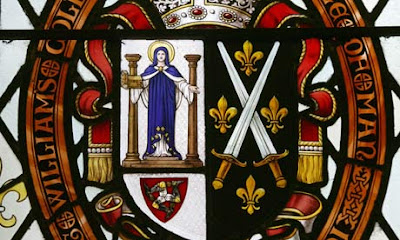 
Up until 1999, pupils at King William's College would sit the paper unseen on the last day of term before the Christmas holidays. The questions are very hard and often cryptic, and pupils got hardly any questions right first time: five percent was considered a good score! During the Christmas holidays, pupils tried to find the answers to the harder questions by consulting reference books or asking clever relatives. When they returned to school in the New Year, they took the test again, under exam conditions and without the aid of notes.

The quiz is now voluntary for the students, but has spread worldwide via publication in The Guardian.  It is, as noted above, inhumanly difficult, requiring impossible amounts of knowledge of trivia and/or extraordinary computer search skills -


A Latin phrase is always printed at the top of the quiz: “Scire ubi aliquid invenire possis
ea demum maxima pars eruditionis est”.  Freely translated, this means "the greatest part of knowledge is knowing where to find something."

The best way to approach the quiz is as part of a group, many of which will form on the internet in the weeks ahead.

I'm not going to reproduce the entire quiz here.  Those who want to tackle the project can download the quiz from the King William's College website, or view the questions where they were printed in The Guardian this morning.

To give everyone a taste of the quiz, here is the sixth set of 10 questions:

1 What was updated by HG Wells?
2 What might be perceived as an apiary?
3 Which island is doubly recognised on 198?
4 Who left great designs in the Gulf and New South Wales?
5 Who, aided by wizardry, cuckolded his rival by impersonating him?
6 Who, being the son of Suzanne, changed his name through the benevolence of her friend Miguel?
7 What did hateful and rough weeds lose apart from beauty?
8 What was the native city of a unique pontiff?
9 What can be used instead of mahogany?
10 Who recruited Hare for Dad's Army?

Each set of ten questions has a "theme."  I"ll give you a hint that for this sixth set above, the theme is that every answer begins with the same pair of letters.  Partial answer in the Comments.

Update:  ALL the answers are now in the Comments.  Hat tips to BJN, Lene Taylor, and Greg.

If you really thrive on intellectual challenges like this, the King William's College website posts the quizzes and the answers for the past three years.