Is there an error in this Constable painting? 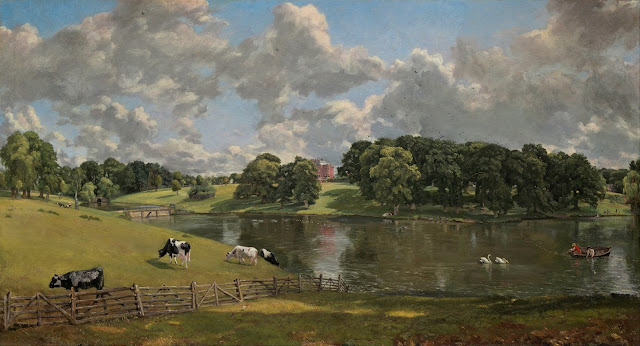 The painting is "Wivenhoe Park" by John Constable, currently in the collections of the National Gallery of Art.

I first saw this painting about 30 years ago in a print that was on the wall of the office of a colleague of mine at the University of Kentucky.  After looking at the painting for a while, I initially concluded that the artist (world famous for his landscape portrayals) must have made an error in depicting the scene.  Nobody else seemed interested in the apparent anomaly, and I lost track of the painting (not knowing its title) until I encountered it again this past week.

I invite you to explore the image (it should enlarge to wallpaper size with a click) to see if you find anything that appears internally inconsistent in the content.

Wivenhoe Park is a real, not an imaginary, place - a country estate in Essex.  Two seemingly contradictory aspects of the painting have puzzled me.  Left center of the image there is a bridge spanning the watercourse: 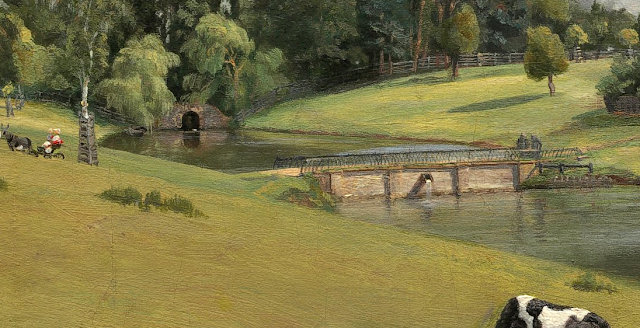 The flow of the water is clearly from the left of the painting toward the right.  Now look downstream to where two fishermen are working their net: 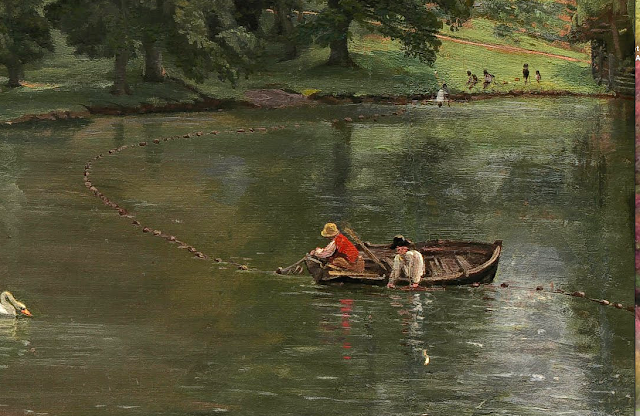 This is presumably a gill net of some sort, spanning the watercourse from shore to shore, held up by cork floats.  They are presumably lifting it in segments to harvest any fish that have become entrapped.

But... the curvature of the net would be consistent with water flowing from the right of the picture toward the left, not left-to-right as the bridge at the left would indicate.

It's a curious mistake for a landscape artist to make - especially an artist as skilled as Constable, and especially when drawing from life rather than from imagination.  I decided that for a painting as large and complex as this one, he must have made preparatory sketches and that his sketch of the fishermen must have been made from the opposite shore, then incorporated into the landscape "backwards."  I thought I found confirmation in this comment from an analysis at the V&A:


The artist rearranged the landscape to create a more harmonious image. For example, the lake and house would not have been visible in the same view in real life.

So perhaps a sort of "compositional error."  I considered other possibilities.  I found the location of Google Maps and zoomed in to confirm that the watercourse in the painting is remote from the sea, so the bowing of the fishing nets is not the result of tidal flow.

But now a different apparent anomaly bothered me.  The Google map confirmed that this isn't a rushing river.  It's not even a decent-sized creek.  In fact if you look at the pipe passing through the dam under the bridge, the flow is almost negligible.  So why is the net bowed?  It clearly goes from shore to shore, not in a huge circle.

The answer came when I tracked down one of Constable's sketches in the archives of the Victoria and Albert: 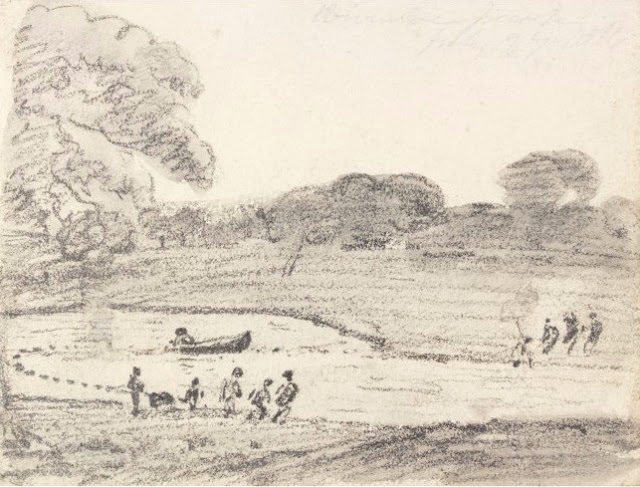 Now it's as clear as day.  The net is being dragged by 4-5 people on each shore (in retrospect they are visible on the far shore in the final painting).   I note also that the V&A entitles this sketch "Fishing with a net on the lake in Wivenhoe Park."  Not a river or stream - just a manmade lake (large pond, really) prettified by a wealthy landowner employing a landscape architect:


In order to evoke a sense of the picturesque the architect Woods introduced an arch and bridge specifically designed to look old...

End of story?  Sort of.  At least in terms of the faithfulness of the representation, Constable has been vindicated, and my original concerns are "much ado about nothing."

But now I'm interested in something else.  My (incorrect) impression from the painting was that it portrayed two fishermen as incidental elements in a landscape. Now the activity appears to be way more than a recreational pastime. This is a large crew - a dozen grown men dragging a lake for fish. On a private estate. These are hired hands - a crew assembled for this purpose. 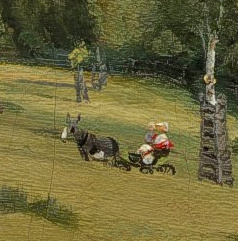 This painting was commissioned by the Rebow family, so Constable incorporated aspects that would be important to the family - including their eleven-year-old daughter Mary driving a donkey cart on the hillside to the left (inset right).

The dragging of the lake must also be important, and I would therefore conclude that the harvest of the fish was significant (important enough to employ all the gardeners on the estate and maybe some hired hands as well.)

Which brings me to my final point (at last, and the reason for posting this long-winded entry in the first place) - aquaculture as a likely practice on English country estates.

After a lot of searching I found this book - 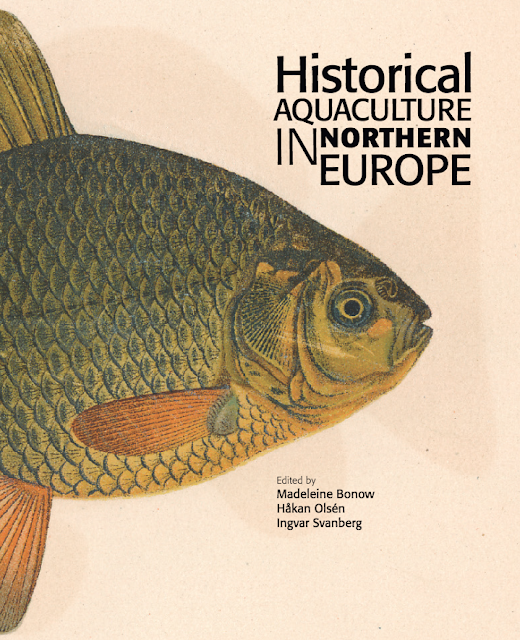 - not in my local library, but available fulltext online here.  Herewith some excerpts:


This book is being published in order to highlight a little-known aspect of animal husbandry in former times, namely the keeping, storing and cultivation of crucian carp (Carassius carassius ), carp (Cyprinus carpio), tench (Tinca tinca) and other cyprinids in man-made ponds... The construction of fishponds began across Europe, and increased rapidly during the twelfth and thirteenth century. At that time, fishponds were constructed on estates belonging to bishops, monasteries and royalty across England... The balance of evidence now indicates that fishponds were introduced into Britain after the Norman Conquest (1066) as a secular aristocratic initiative rather than a monastic innovation... The abundance of literary references to fishponds shows that their possession, along with mills, dovecotes and deer parks, was one of the privyleges of manorial landholders, a badge of rank as much as a practical utility... Many royal castles, palaces, manor-houses and hunting-lodges were equipped with fishponds... An account book for 1632–6 kept by the Duke of Suffolk’s estate steward records the cleaning-out of the Lulworth Castle fishponds at a cost of £9 4s 8d and the purchase of a ‘trammell nett’ (a long, narrow fishing-net held vertically in the water by floats and sinkers, consisting of two walls of large-meshed netting, between which a narrow-meshed net was loosely hung) for catching the fish... The fishing of Stonehead Lake in 1793 produced 2,000 carp ‘of large dimensions’, including one 8 kg specimen... By the 1740s the geometrically-shaped ponds associated with formal gardens were passing out of fashion. Some were abandoned, others altered, as revolutionary ideas of ‘landscape’ gardening encouraged the creation of larger lakes of more ‘natural’ appearance... Yet some advocates of agricultural improvement were still promoting fishponds as a contribution to the farming economy into the early nineteenth century... Frensham Great Pond was still emptied every five years for fishing-out as late as 1858...

Constable completed Wivenhoe Park in 1816, so apparently aquaculture was still a going concern at that estate.  I wonder if such efforts were revived during the relative scarcities of WWII.  I'd especially like to hear any input from British readers of this blog regarding this subject.