Evidence of agroforestry in the ancient Amazon 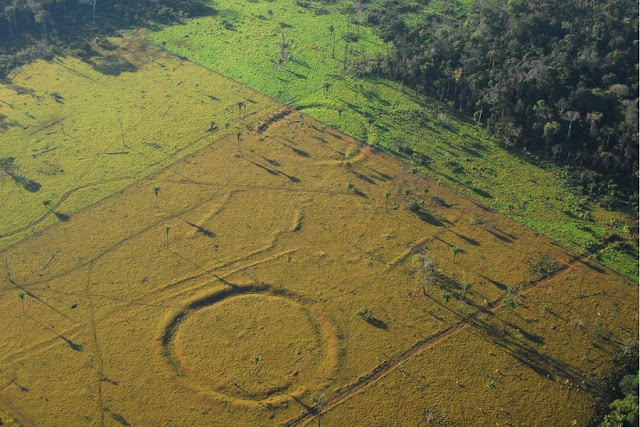 Football field sized patterns of deep ditches dot the landscape of northwestern Brazil. The discovery of these huge earthworks, which date back almost 2,000 years, has triggered intense debate regarding their origins among archaeologists and ecologists...

It wasn't until the late 1970's that deforestation first revealed the geoglyphs hiding under upland rainforest. Covering more than 5,000 sq. miles in the Brazilian state of Acre, more than 450 large-scale earthworks...

A relatively heavy charcoal layer suggests that the new residents cleared the bamboo forest with fire, letting the fast-growing palm trees spring up to fill the space left behind. Over the long term, one would expect the palms to be overtaken by slower-growing plants, but that’s not what the team found.

Instead palms flourished for three thousand years, likely encouraged by the human newcomers, who could use them for food and building material. Dr. Watling suspects they engaged in practices including planting seeds, transplanting saplings, and weeding out undesirable plant species, as well as light burning and farming. She calls these techniques agroforestry: “[maintaining] the forest but [changing] its species composition to make it a more livable place.”

Much more discussion at the Christian Science Monitor.   See also the Wikipedia page on terra preta and my 2012 post 1491: New Revelations of the Americas Before Columbus.