James Garfield - president for only 200 days 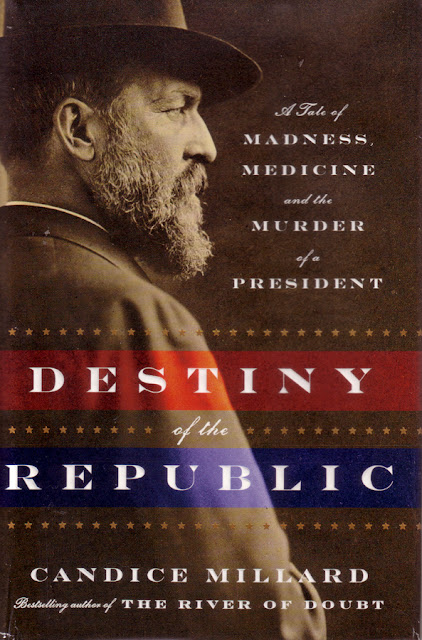 I have a new favorite president. Before reading this book, literally the only things I knew about James Garfield were that he was featured on the 20c prexie stamp (because he was the 20th president) and that he was assassinated while in office. Now I can add the following...

He grew up in Ohio in abject poverty – a one-room log cabin with a plank floor and windowpanes made of oiled paper. When he was two years old, his father died at age 33, leaving his mother with four children to feed. She farmed the land with the aid of his 11-year-old brother and saved money so that by age four James was able to get a pair of shoes. At age sixteen he began working on the Erie and Ohio Canal, but returned home after contracting malaria. By then his mother had saved $17, which was used to send him to Western Reserve Eclectic Institute, a one-building prep school. During his first year he worked as a janitor in exchange for receiving an education.


So vigorously did Garfield apply himself during his first year at the Eclectic that, by his second year, the school had promoted him from janitor to assistant professor. Along with the subjects he was taking as a student, he was given a full roster of classes to teach, including literature, mathematics, and ancient languages. He taught six classes, which were so popular that he was asked to add two more – one on penmanship and the other on Virgil. (p. 23)

From there he moved to Williams College in Massachusetts and graduated in two years. He entered state politics in Ohio, then served in the Civil War in the Union Army, after which he was elected to Congress. He did NOT want to be president. He attended a nominating convention which was hopelessly deadlocked. On the 34th ballot, some electors voted for him. He rose to protest and was told to sit down.  On the 36th ballot, he became the Republican nominee – against his will. He was described as shocked, sickened, and pale as death during the proceedings. (pp 40-46).

He never participated in the campaign which was conducted on his behalf, preferring to work and receive visitors on his 160-acre farm. 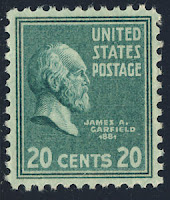 He built a barn, moved a large shed, planted an orchard, and even shopped for curtains for the house…. he added an entire story, a front porch, and a library. Even with the new library, Garfield’s books filled every room. “You can go nowhere in the general’s home without coming face to face with books,” one reporter marveled. “They confront you in the hall when you enter, in the parlor and the sitting room, in the dining-room and even in the bath-room…” (p. 58)

His campaign platform as a Republican emphasized civil rights and the welfare of the freed slaves, in which endeavor he was supported by Frederick Douglass. Voter turnout for the election was 78%, and he was elected by a narrow margin.


In the days that followed… Garfield could not shake the feeling that the presidency would bring hi only loneliness and sorrow. As he watched everything he treasured – his time with his children, his books, and his farm – abruptly disappear, he understood that the life he had known was gone. The presidency seemed to him not a great accomplishment but a “bleak mountain” that he was obliged to ascend. (p. 64)

The assassin, Charles Guiteau, was a religious fanatic who was delusional to the point of frank psychosis. He borrowed $10 to buy a gun, used it to shoot the president not for any political or philosophical reason, but because he believed God wanted him to do it.


His first and primary defense was “Insanity, in that it was God’s act and not mine. The Divine pressure on me to remove the president was so enormous that it destroyed my free agency and therefore I am not legally responsible for my act.” (p. 237)

The “insanity defense” was well established at the time. Interestingly, everyone at the time agreed that Guiteau was insane and that insane people were not liable for their actions. Everyone on the jury knew this also, but they were so angry that they basically said “he’s guilty – hang him anyway.”

Other interesting tidbits from the book: After Garfield was shot, the second physician who responded to the event was Charles Purvis, surgeon in chief of the Freedmen’s Hospital, 39 years old, one of the first black men in the U.S. to receive medical training at a university, and obviously the first ever to treat a president. (p. 140)

The White House of that era was like a slum residence, perpetually damp with rotting wood and vermin-infested walls and the odor of raw untreated sewage, situated next to a malarial tidal marsh. (p. 176)

Garfield was a Republican who embodied the party’s enthusiasm for helping immigrants, freed slaves, and impoverished people. He believed the key to improving the country lay in educating those people. (182)

It has been said that Guiteau did not kill the President – he shot him, but the doctors killed him by repeatedly probing the wound with ungloved, unwashed fingers. Guiteau used this argument in his own futile defense (“General Garfield died from malpractice.”). The bullet had lodged on the left side of his body behind the pancreas, but the attempts to find it on the right side resulted in profound septic sequelae:


One cavity in particular, which began at the site of the wound, would eventually burrow a tunnel that stretched past Garfield’s right kidney, along the outer lining of his stomach, and down nearly to his groin. An enormous cavity, six inches by four inches, would form under his liver, filling with a greenish-yellow mixture of pus and bile. (p. 196)


Just two weeks after the surgery, another abscess formed, this one on Garfield’s right parotid gland… the abscess had become so filled with pus that it caused his eye and cheek to swell and paralyzed his face. Finally, it ruptured, flooding Garfield’s ear canal and mouth with so much pus… that it nearly drowned him. (p. 216)

The woefully incompetent Dr. Bliss treating him [“Ignorance is Bliss”] tried to cope with the president's rapid cachexia by feeding him intrarectally. The eventual cause of death (determined by autopsy) was hypovolemic shock following a rupture of the splenic artery (probably from a septic aneurysm).

Garfield does not get credit for any particular legislative achievements, because his time in office was too brief. Rather, his legacy is reflected in how his illness and death united the people of the country during the fractious time in the aftermath of the Civil War. And since Guiteau’s act had arisen in connection with the corrupt “spoils system” for giving out lucrative government job contracts, the popular revolt after the death led to the establishment of the civil service system. After his death, Garfield’s widow assembled his books and papers in a wing of their farmhouse, establishing the nation’s first-ever presidential library.

The book is Destiny of the Republic. A Tale of Madness, Medicine and the Murder of a President, by Candice Millard, published by Doubleday in 2011. I'm pleased to add it to my list of recommended books.

Addendum 2016:
I am delighted to report that the superb television series American Experience has just released a program entitled "Murder of a President," about President Garfield; it is based on the book I reviewed above in 2012.  The two-hour program is playing on PBS stations around the country, and it can be viewed online here.