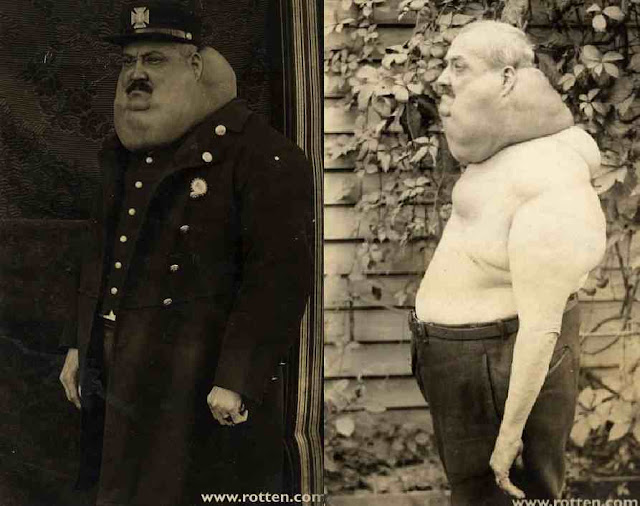 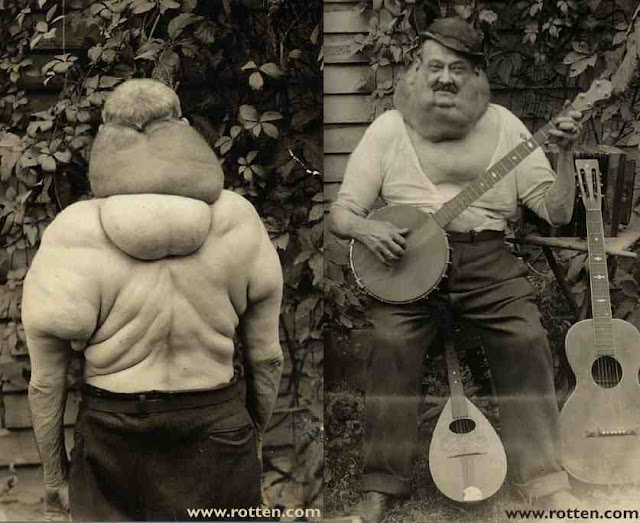 This gentleman's affliction is all over the internet; the photos typically are watermarked "rotten.com," [a now-defunct "shock site"] though I can't ascertain where they originated.

The images pop up in blogs and websites with commentary which typically takes one of two pathways: 1) simple amazement at the deformations the human body is capable of attaining, sometimes with a degree of pity or admiration for what the man endured, or 2) juvenile and mindless ridicule of the man as a defective specimen of humanity. At ebaumsworld the thread is peppered with "makes me want to throw up," "he should stay indoors," and the other cruelties that the anonymity of the web seems to exacerbate.

The association with the banjo is obviously fortuitous; the gentleman simply chose to pose for the photographer holding his favorite instrument.

In all cases, the assertion - stated or implied - is that this man has a goiter (enlarged thyroid). Apparently I'm going to be the first to suggest that this man does NOT have a goiter.

A goiter can cause immense enlargement of the neck, but his is not focal - it's circumferential to an extent that if caused by a thyroid would result in near-asphyxiation from compression of the trachea. And note that this man's pathology is not confined to the neck - it extends forward to lumps on his anterior chest and posteriorly to his upper back and upper arms. The overall appearance suggests fatty tissue, in a man who is certainly obese but not grotesquely so.

I've sent these photos to an academic pathologist, who emailed me back with the suggestion that this man probably has multiple symmetric lipomatosis (eponym: Madelung's disease):


diffuse lipomatous masses deposited symmetrically around the neck, back, shoulders and upper trunk.. Suprascapular and supraclavicular involvement is common and occasionally it may involve the parotid and post auricular region. The face and distal extremities are usually spared...

There is a schematic depiction here, and a sketch of diffuse lipomatosis of the neck at this link, and others retrievable with a quick Google.

Blogged not for any cosmically significant reason; correcting a misdiagnosis perpetuated in cyberspace on a man from an earlier generation is not of particular importance. But after having read some of the trash said about him, it seemed necessary to give him a moment of dignity. He had the courage to display his affliction to the world. I don't think he was embarassed by it; I think he must have come to embrace it as part of what defined him in other people's eyes. And when he sat down with his banjo for the photographer, I thought this was the kind of guy I would be pleased to have over to my house for a party.


(Reblogged from 2008 for a newer generation of readers)